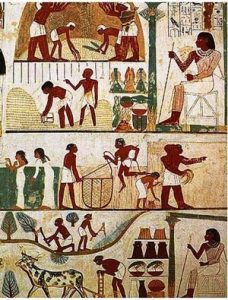 Maybe when people first started farming, each family pretty much farmed by itself. Mom and Dad and the kids planted the grain and the vegetables, and later they harvested them. And throughout antiquity and the middle ages, many farms were family farms that worked just like that.

But there were also other ways to be a farm-worker. Some people were slaves working on somebody else’s farm.

Or, some families rented a small piece of somebody else’s farm, and then paid the owner part of the crop as rent (this is sometimes called share-cropping).

Because most of the work on a farm is the planting and the reaping, in October and June, a lot of rich people just bought a few slaves, who did the weeding and kept things going during the rest of the year, and hired people by the day just during the busy seasons of planting and harvest. Often these people were paid in food, but sometimes they were paid in money.

Many people who had their own small farms also worked on big farms during the harvest.

Learn by doing: Growing your own herbs

Bibliography and further reading about farming:

Ancient Greek Agriculture: An Introduction, by Signe Isager and Jens Erik Skydsgaar (1992). Details of what tools farmers used, and what methods.