History of the family 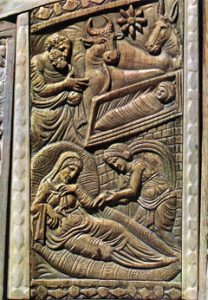 History of the family: Jesus, Mary, and Joseph, in a medieval ivory carving

Were families the same as they are now?

Who was in your family?

Most children lived with their mothers and fathers and brothers and sisters at first, but often they lost one or both of their parents before they grew up, because people died younger then.

Life expectancy in history
History of slavery
What are freedmen?

Kids then had more brothers and sisters than most people do today, but more kids had young brothers or sisters who died, too. Kids sometimes lived with their grandparents if they were still alive. Richer people lived with the people they had enslaved, and they thought of these enslaved people, even if they had been freed, as part of their family.

Inheritance and the family

When your parents died, you might inherit their land or their cattle or sheep. Inheritance was a lot more important in ancient and medieval times than it is today, because most people were farmers, and they needed land to farm.

More about inheritance
Inheritance in West Asia
What is a dowry? 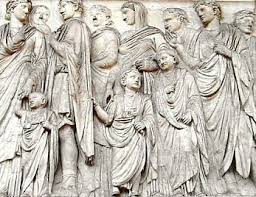 Ara Pacis Augustae – the Altar of Peace, in Rome

In the Bronze Age

But not all the families of the ancient world were the same. In West Asia, in the days of the Sumerians and Assyrians, people lived in big families, and often women took a big role in business and making money for the family.

In Egypt at about the same time, women also had an important role outside the house. Most children helped their parents with the family business.

In ancient Greece and Rome

In Classical Greece, on the other hand, women almost never left their houses if they could help it, and men did not say women’s names in public: instead, they said “wife of Alcibiades” or “mother of Pericles” (the way we say “Mrs. Garcia” or “Mrs. Goldstein”). Some boys went out to school, and might do different things than their fathers had done.

In the Roman Empire, women again had a stronger role outside the house, but boys continued to go to school. Enslaved people became more and more important in families. Adoption was very common.

In the Middle Ages

After the fall of Rome, religion gradually became more important in how families were put together. In the part of Europe and West Asia that was Christian, divorce became much more difficult, and infanticide became illegal. Marriage slowly became a more formal, religious ritual than it had been before. People didn’t think of their slaves as part of their family anymore.

In the Islamic world, at the same time, divorce remained pretty easy. Islamic law limited the power of a man to beat his wife, while Christian countries did not. The Quran allowed rich men to have as many as four wives, although most men still only really had one. Women mainly stayed inside their houses.

Did you find out what you wanted to know about the history of the family? Let us know in the comments!

(We’re sorry we don’t have an article on the history of the family in the Americas yet, working on that)