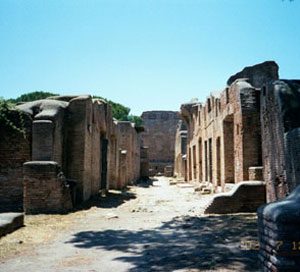 Insulae at Ostia (can you see where the wooden balconies would have been?)

In big cities, most Romans lived in apartment buildings we call insulae (IN-sue-lie), or islands (because they often took up a whole city block). They’re not just in the city of Rome, but also in Ostia (the port of Rome), Italica in Spain, and many other Roman cities.

Did most people live in apartments or houses?

During the 100s AD, there were almost 50,000 apartment buildings in Rome (mostly with many families living in them), and fewer than 2000 private houses.

What were apartment buildings built of?

At first insulae were usually built of wood. They were usually three or four stories high. They often had latrines built into them on each floor. But you had to go down to the street fountains to get water. 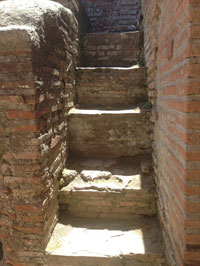 A staircase in a Roman insula (Ostia)

Later, because of the risk of fire, insulae were more often built of brick and concrete. We have many insulae preserved to look at today, especially in the Roman port town of Ostia, near Rome. There are also insulae at Pompeii, and at Italica in Spain.

Apartments with shopping and restaurants

Many insulae had shops and restaurants on the ground floor, like our city apartment buildings today. Often they had fast food places called thermopolia because you could get hot food there. Some of the nicer insulae were built around four sides of a small enclosed garden, but poorer people lived in crowded apartment buildings without gardens, just narrow airshafts to let in light.

At first, many insulae were built out of wood, and they often burned down. The Roman emperors made a lot of rules about how you could build them. They had to be brick, not wood. They couldn’t share walls – each building had to have its own walls. Apartment buildings couldn’t be more than a certain height. These rules helped to reduce the number of bad fires in Roman cities.

Nero and the Great Fire in Rome

Did you find out what you wanted to know about Roman apartment buildings? Let us know in the comments!

Houses, Villas, and Palaces in the Roman World, by Alexander McKay (1998). For historians, by a specialist.

The City in the Greek and Roman World, by E. J. Owens (1992). Also by a specialist, about town planning.