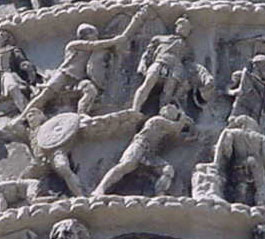 Roman soldiers on the Column of Marcus Aurelius, Rome

The Romans were (along with some Greek city-states) among the first people on Earth to pay their soldiers a regular salary so that they could be full-time soldiers instead of only fighting when they could spare the time from their farms. At first, the Romans had part-time soldiers like the Carthaginians and the Etruscans, but by about 100 BC, under Marius, the Romans began to pay soldiers to fight all year round. This gave them a lot of time for training and they became much better soldiers.

For the most part, only men could serve in the Roman army, though a few women may also have served. Men joined the army when they were about nineteen years old. Sometimes men volunteered for the army, either out of patriotism or for the adventure, or in the hope of rising to be an officer, or in the hope of getting citizenship, as people do in the United States today. Sometimes the Roman government forced men to join the army when they didn’t want to. Some men cut off their thumbs to get out of it.

Once you were in the army, you joined a legion – a group of soldiers who lived and fought together. In the time of Augustus, there were 28 legions, each one with about 5000 men in it. Within the legion (LEE-jun), you were in a cohort of about 500 men, and within that you were in a century, with about 80 men (even though the name should mean 100 men, since centum is “100” in Latin). Your commander was a centurion (sen-TOO-ree-ahn). Then within that you were in a “tent group” or contubernium, made up of you and the seven men who shared your tent and ate with you. These men were your pals for life (unless they got killed).

If you didn’t get killed, you would serve in the army for twenty-five years. If you joined at 19, you would be 44 when you got out. Most Roman men died in their forties or fifties, so you would expect to spend pretty much all of your life in the army. Soldiers were not supposed to get married or have children, but often they did anyway.