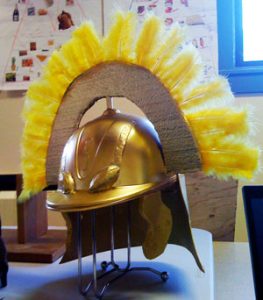 Roman helmet, from the kids at Laurelhurst School, Portland, Oregon

Although the Romans did many other things besides fight battles, certainly one of their greatest achievements was the world’s first really professional, paid army. Roman soldiers conquered most of Europe and all around the edges of the Mediterranean Sea, and held onto it for five hundred years. 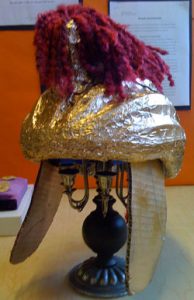 Another Roman helmet from Laurelhurst School

You can make Roman helmets, spears, and swords for your history museum or just as a project. One student made the helmet on the upper right from a baseball cap spray-painted gold, some plywood, and broom bristles. Another student made the helmet on the left from a bike helmet covered with foil, some cardboard, and some yarn. The stand is an old lamp. 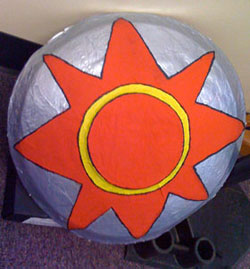 There’s a Roman shield made from cardboard and papier mache, dried and then painted. Some Roman shields were round like this one, but at other times Roman soldiers carried rectangular shields, so you could also make yours rectangular instead of round.

Or you could make a Roman sword, like the one below. This one is made from foam rubber, painted to look like metal.

More about the history of iron and steel
More about ancient Rome
Quatr.us home