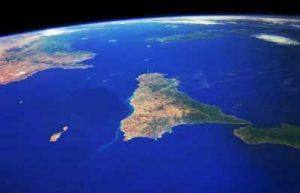 Sicily seen from space (the tip of Italy is on the right): the First Punic War was fought here.

We know the Roman side

Most of what we know about the First Punic War comes from either Polybius or Livy: they were on the Roman side. We don’t have any Carthaginian history books anymore.

Who was Polybius?
And who was Livy?
All our ancient Rome articles

How did the war start?

By 274 BC, the Romans had taken over all of Italy. Then a Greek city that was NOT in Italy asked the Romans to help it out in a war. This city was in Sicily, a big island near Italy in the Mediterranean Sea.

The Roman Senate did not know what to do. Some men thought they should go help, and conquer Sicily too. Other men thought it was too far away. But in the end the Romans did send their army to Sicily.

How did Carthage get involved? 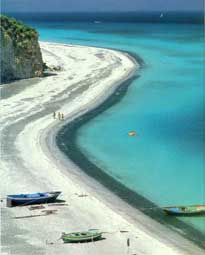 A beach in Sicily

Sicily at this time was divided in two parts. One half had Greek cities in it. The other half had Carthaginian cities. When the Carthaginians heard that the Romans were coming, they were afraid the Romans would try to conquer them, too. So they attacked the Romans.

At first the Carthaginians were beating the Romans, because to go to Sicily you had to go in boats, and the Romans weren’t very good sailors.

The Romans learned how to sail

But the Romans learned how to sail by capturing a Carthaginian (Punic) ship and copying it. And in the end they beat the Carthaginians and won the first Punic war. Now the Romans took over the whole island of Sicily, and made all the cities pay taxes to Rome and have a Roman governor.

History of silver
What about gold?

The Romans had not conquered the city of Carthage itself, which was in Africa. But the Romans made the people of Carthage pay the Romans a huge amount of money, to pay for the war. And the Romans took control of the silver and gold mines on the island of Sardinia.

Bibliography and further reading about the First Punic War:

The First Punic War: A Military History, by J. F. Lazenby (1996). The only academic narrative account of the war in English.