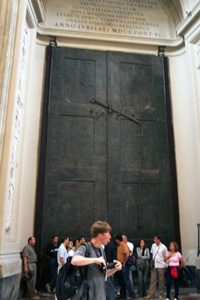 The Senate house had great big bronze doors on it. (One of the Popes moved those doors to a Christian church in Rome, but they’re still the same doors).

When the Roman Republic was first set up, about 500 BC, the people in charge were two men called consuls. (Nobody’s sure whether the Romans had this idea first, or the Carthaginians – the two places had similar governments. Compare this also to the government of Sparta at the same time.) Roman men didn’t let women become consuls. The consuls controlled the army, and they decided whether to start a war and how much taxes to collect and what the laws were. Both consuls had to agree in order to change anything; if one of them said veto, Latin for “I forbid it”, then the law didn’t pass. 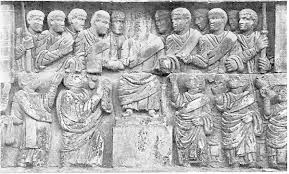 The consuls got advice from the Senate, which was made up of men from rich families in Rome. They didn’t allow women in the Senate, either. Once you got into the Senate, you stayed in for the rest of your life. Most consuls eventually joined the Senate, and most senators were from families where their fathers and grandfathers had been in the Senate. Most of the time, the consuls did what the Senate advised.

There were also prefects in Rome, whose job it was to run the city. Some heard court cases, some ran the vegetable markets or the meat markets or the port. 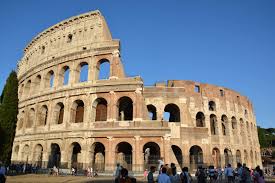 Finally, there was also an Assembly of all the men (not women) who were grownup and free and had Roman citizenship. They voted on some big issues, if the consuls asked them to: things like whether to go to war. And they elected the consuls and prefects and the Senators. But the Assembly was set up so that richer men got more votes than poorer men.

Once the Romans began conquering other places, far away from the city of Rome, they also had a system of provincial governors, men who took charge of a province of the Empire, and who heard court cases there. They were also in charge of the army while it was conquering places.

By about 50 BC, provincial governors like Julius Caesar had begun to take over the government and not pay any attention to the consuls or the Senate anymore, and just do as they pleased. They could do that, because they had the army with them.

Caesar’s nephew, Augustus, was one of these generals. But he realized that people didn’t like this pushing people around, and so he set up a different system (but still one where he had all the power). Augustus kept the Senate and the consuls, and he said they were in charge, but he made the Senate vote to give him the powers of a tribune for the rest of his life. That way, he could veto (forbid) anything the Senate tried to do that Augustus didn’t like. And, he kept control of most of the army as well. So he could kill anyone who got in his way.

This system – where there was still a Senate and consuls, but the Emperors had all the real power – kept on going for the next 1500 years, more or less, until the Ottomans conquered Constantinople in 1453 AD.

Learn by doing: how is United States government like or unlike Roman government?
More about the emperor Augustus
More about ancient governments

The World of the Citizen in Republican Rome, by Claude Nicolet (1980).

You can also get a cool Roman soldier costume to act out historical events: