Sparta, Greece – The city-state of Sparta in ancient Greece 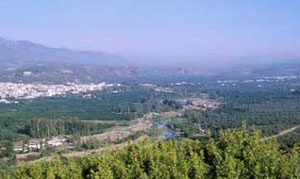 The ruins of Sparta and the valley around it

Sparta in the Bronze Age

Sparta was a town in southern Greece. It was already a town in the Late Bronze Age. So it appears in Homer‘s Odyssey as the kingdom of Menelaus and Helen.

More about Menelaus
The Late Bronze Age
All about Ancient Greece

The biggest change in Sparta’s history, though, came around 700 BC, when the Spartans seem to have conquered a group of people living near them, in Messenia. The Spartans enslaved the Messenians, whom they called helots (HEEL-otts), and made the Messenians (mess-EEN-ee-anns) farm all the land for them.

The Spartans treated the helots very badly, often beating them and whipping them, or even killing them for no reason, and not giving them enough food. Spartan men, now that they didn’t have to work anymore to get food, spent all their time training for war. With all that practice, the Spartan army got really good at a new kind of fighting called hoplite warfare.

Spartan boys train to be soldiers 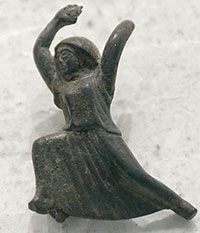 When little Spartan boys turned seven, they left home to live in dormitories with all the other Spartan boys their age. They did not learn to read or write or do math or play music, but instead they spent all their time learning to be good soldiers. They exercised, and they learned to use swords and spears.

More about music in ancient Greece

To make these boys tough, their teachers never gave them enough food or clothing or blankets. People in other Greek city-states, like Athens or Thebes or Corinth, told stories about how mean the Spartans were to little boys.

The Spartan boy who stole a fox
What is a city-state?

What about Spartan girls?

Spartan girls lived at home with their mothers and fathers, instead of in dormitories, but they also learned to be tough, with plenty of exercise. The girls also learned to run houses, and how to spin and weave. But most of their work, like that of their brothers, was done by helot slaves.

Read more about women in ancient Greece
History of spinning

Did you find out what you wanted to know about ancient Sparta? Read our article on Sparta in the Persian Wars or ask your question in the comments.

Learn by doing: find Athens, Sparta, Corinth and Thebes on a map
Sparta in the Persian Wars