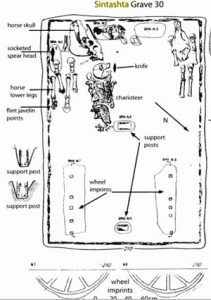 When about 2000 BC the Central Asians invented better wheels with spokes, so you could fight from your chariot, a new wave of Indo-Europeans moved from Central Asia west to Greece, and Italy, or south into Egypt and Iran, and from Iran about 1500 BC to India. Some of them probably reached Shang Dynasty China. By 1500 BC, they invaded Egypt. They brought their chariots, their horses, and their language with them all over Afro-Eurasia.

By about 1500 BC, there were more new inventions. People in China learned to write/ In West Asia, people invented the alphabet. And the Hittites were just beginning to use a new metal, iron, which was stronger and more flexible than bronze, and also easier to get. In South and Central America, people were farming squash and corn and beans, and maybe potatoes and sweet potatoes.

In the Late Bronze Age in Egypt, the New Kingdom brought huge stone temples and statues, and the Egyptian pharaohs conquered far to the south, into modern Ethiopia and Eretria, and to the west into Libya, and to the north into Israel (this is the time of Joseph). Further south in Kerma (modern Sudan), rulers built mudbrick palaces.

Further north, in Crete and Greece, the Minoans and Mycenaeans copied the Egyptians by building their own stone palaces. In West Asia, the Hittites and Assyrians traded and built great palaces also. In China, the Shang Dynasty also used bronze and built palaces.

About 1200 BC, there began to be problems in West Asia, Greece and Egypt, which might be because of a global warming trend about this time. The Egyptian and Hittite empires fell apart, and smaller groups like the Kushites and the Jews got to have their own independent countries (this is the time of Joshua and King David).

The Shang Dynasty in China collapsed and was conquered by the Chou Dynasty; the Harappans in India also collapsed. But in Central America, the Olmec civilization was just getting started building big stone temples and using writing. They were starting to use rubber.