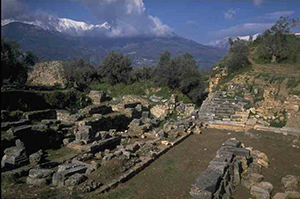 Menelaus and Helen lived in Sparta

Menelaus was the son of Atreus, so he was also the younger brother of Agamemnon. The older brother, Agamemnon, inherited his father’s kingdom at Mycenae.

Who was Atreus?
Who is Agamemnon?
More Greek mythology
All our Ancient Greece articles

How did Menelaus get Helen?

So Menelaus didn’t have a kingdom. Instead, he competed with everyone else and won the contest to marry Helen. Helen was the daughter of the old king of Sparta. Helen’s father made everyone swear to support Menelaus’ right to Helen. When the king of Sparta died, Menelaus became the new king of Sparta.

Who was Helen?
The kingdom of Sparta

How did Menelaus lose Helen?

Not long afterwards, Menelaus welcomed Paris, the youngest son of the king of Troy, into his house as a guest. But in the middle of the night, Paris took Helen away to Troy.

The judgment of Paris
Iphigeneia

Menelaus insisted that his brother Agamemnon had to lead the Greek army to Troy. They had sworn an oath. They had to get Helen back – even at the cost of sacrificing Agamemnon’s daughter (and Menelaus’ niece) Iphigeneia.

Did Menelaus fight in the Trojan War? 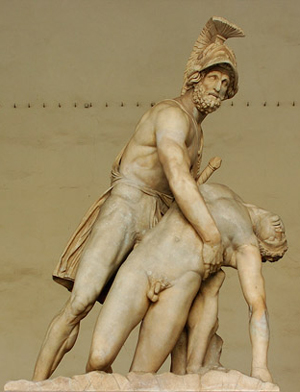 During the Trojan War, Menelaus fought bravely. It was Menelaus who brought Patroclus‘ body back to Achilles after Patroclos was killed. Menelaus was a good and honorable fighter, but he wasn’t the leader or the best fighter.

After the Trojan War, Menelaus got Helen back and he sailed home with her. They didn’t have any trouble getting home, even though Agamemnon did.

Menelaus and Helen went right back to living in their house in Sparta and apparently got along fine. They appear in Homer’s Odyssey, where they welcome Odysseus’ son Telemachus to stay with them as their guest. Really, Menelaus did pretty well for himself from beginning to end.

Learn by doing:
More about the Trojan War

Bibliography and further reading about Menelaus:

The Iliad, by Gareth Hinds. A graphic novel version – kids love it!

The Iliad (Penguin Classics) by Homer. Translated by Robert Fagles.