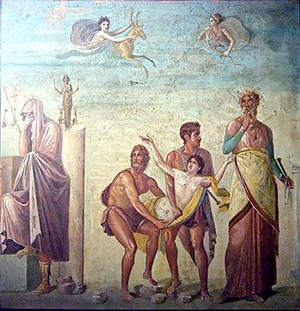 Menelaus, Agamemnon, and their oath

When Helen ran off with Paris, her husband Menelaus, the king of Sparta, was very upset. He went to visit his older brother, Agamemnon (ag-a-MEM-non), the king of Mycenae. Menelaus reminded Agamemnon about the oath that all the suitors swore when they were fighting over who would marry Helen.

Who was Helen of Troy?
Who was Menelaus?
The Judgment of Paris
Atreus and Thyestes
More Greek myths
All our ancient Greece articles

Preparing to go to Troy

Menelaus insisted that his brother call together all the Greek armies from all the different cities and go fight the Trojans to get Helen back. Agamemnon objected that he had only meant that he would defend Menelaus against the other suitors, but Menelaus still said he had to get Helen back or break his oath.
So Agamemnon called all the Greek armies together at a port called Aulis (OW-liss). They got ready to sail to Troy.

The wind blows the wrong way

But when they were ready to sail, the wind was blowing always in the wrong direction, toward the land, and the Greeks could not get to Troy. They asked their priest, Chalcas, if he knew what was wrong. Chalcas told Agamemnon that the god Artemis was sending the bad wind. She was angry. To put Artemis in a better mood, and get the good wind so the Greeks could sail to Troy and get Helen back, Agamemnon would have to sacrifice his oldest daughter, Iphigeneia (if-a-jen-I-ah).

What makes the wind blow?
Who is Artemis?
What is sacrifice? 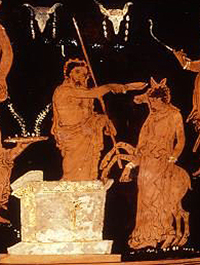 Agamemnon prepares to sacrifice Iphigeneia on a red figure vase

What should Agamemnon do?

Naturally Agamemnon was horrified. Kill his daughter? He told Menelaus he couldn’t do it. But Menelaus said then he would be breaking his oath to save Helen.

In the end Agamemnon agreed to kill Iphigeneia. He got her mother (his wife), Clytemnestra, to bring Iphigeneia to Aulis by telling Clytemnestra (kly-tem-NES-tra) that Iphigeneia was going to marry the famous young hero Achilles.

Who was Achilles?
Who were the Trojans?
The Iliad – a summary

But when Iphigeneia got there, he tied her up, put her on an altar, and killed her. Then Artemis was happy, the wind changed, and the Greek ships sailed for Troy.

The end of the story

Even the Greeks felt bad about this awful story. In some versions, Artemis invisibly rescues Iphigeneia from the altar at the last minute and puts a deer in her place, like the story of Abraham and Isaac from the Bible or the Quran.

Learn by doing: debate whether Agamemnon made the right choice
More about the Trojan War

Bibliography and further reading about Iphigeneia:

Iphigeneia at Aulis, by Euripides. Translated by W.S. Merwin and George Dimock. The original Greek play, translated into English.

Iphigeneia: Agamemnon’s Daughter : A Study of Ancient Conceptions in Greek Myth and Literature Associated With the Atrides, by Maria Holmberg Lubeck (1993). By a specialist, for specialists.