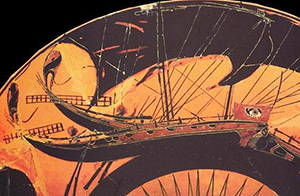 People called the earliest Greek warships pentekontors. They were probably designed to compete with similar Phoenician ships being built about the same time. Pentekontors were long, narrow ships, designed to go fast so they could overtake other ships and attack them. They had 25 rowers, or oarsmen, on each side.

By the 500s BC, in the Archaic period, though, Greek carpenters – like Phoenician carpenters – were building even faster ships. These new ships had more oars, and more oarsmen to pull them. And they had bronze points on the front, called rams, so they could smash into enemy ships and break them up.

People called these new ships triremes, meaning “three oars”. Instead of twenty-five oarsmen, triremes carried seventy-five on each side, three times as many. They had three sets of oars, one on top of the other, so they could go very fast. Archaeologists think that triremes could go as fast as 14 knots in good weather. Triremes didn’t carry very many soldiers though – they were weapons themselves, for naval warfare, not troop carriers.

In the 400s BC, in the Classical period, the Greeks also built a heavier kind of ship called the quinquireme, meaning “five oars.” Quinquiremes were not as common as triremes, but they were heavier and harder to blow off course when there were strong winds. Quinquiremes also had lead coatings on their bottoms to protect them against being rammed by enemy ships.

Bibliography and further reading about Greek boats and ships: