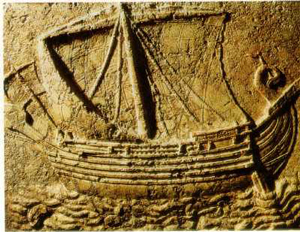 In 480 BC, the Persian king Xerxes was attacking Greece. Things looked very bad for the Greeks, when the Greek navy, under the command of the Athenian general Themistocles, wrecked the Persian fleet at Salamis and kept the Persians from taking over Greece.

Both the Persians and the Greeks used triremes to fight this naval battle. The Persians had a lot more ships than the Greeks did, but the Greeks tricked them. The Greeks convinced the Persians that they were going to attack at night. So the Persians stayed up all night, rowing around watching out for the Greeks. Meanwhile, the Greeks were all sleeping. 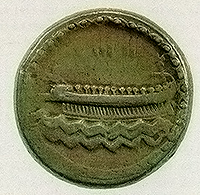 Phoenician ship on a coin

In the morning, when the Greeks woke up all fresh and rested, the Persians were all very sleepy and cranky. Then the Greeks attacked. Even though there were a lot more Persians than Greeks, the Greeks won because they had gotten a good night’s sleep. (Think about that, next time you want to stay up late on a school night!).

Learn by doing: rent a kayak or a rowboat
More about the Battle of Salamis

Bibliography and further reading about the battle of Salamis: