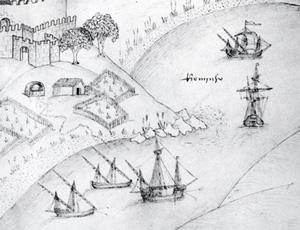 The Early Middle Ages – about 500 AD – brought a major change in Mediterranean ship-building. Instead of putting the planks together to build the outside shell of the ship first, Mediterranean ship-builders began to build the ship’s frame first, and then fasten the shell planks to the frame. This “frame-first” construction was faster and cheaper, and made it easier to experiment with different shapes for the ships.

What were Roman ships like?
All our medieval Europe articles

More than one mast

Then ship-builders started experimenting with using more than one mast for the sails. During the early Middle Ages, sailing ships on the Mediterranean sea continued to use the triangular sail developed during the Roman Empire. But by 1000 AD, Italian merchants from Venice and Genoa and Pisa were sailing in ships with three masts, each with a triangular, or lateen, sail. Using three masts let sailors adjust even better to changes in the wind.

How to sail south to West Africa?

Still, Mediterranean sailors in the Middle Ages had an important unsolved problem. They wanted to sail south along the Atlantic coast of Africa, to trade with West Africa by ship instead of across the Sahara. It would be much cheaper to bring African gold and slaves north by ship than by camel or by forcing them to walk. European ships could sail south to West Africa just fine, but then they couldn’t sail back, because the winds along the coast almost always blew south and not north.

Tacking: sailing into the wind

In addition, medieval sailors couldn’t sail any further south, to explore South Africa, because after West Africa the water current ran north along the coast. In order to sail here, you would need to be able to tack: a method of moving the sail back and forth that lets you sail into the wind. Portuguese ship-builders figured out how to combine square sails and the lateen sail to sail north even when the wind is blowing south. 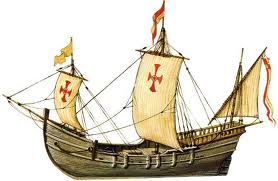 Who was ruling Portugal?

Once Portuguese ship-builders had figured out how to sail along the coast of Africa, they became interested in sailing right across the Atlantic Ocean itself, towards China (well, really towards North America, but they thought they would get to China).

The compass and the astrolabe

Portuguese sailors had recently gotten hold of a Chinese invention – the compass. The compass, combined with the astrolabe, made it possible to tell how far north or south you were, even when you were out of sight of land.

How to make a compass
What is an astrolabe? 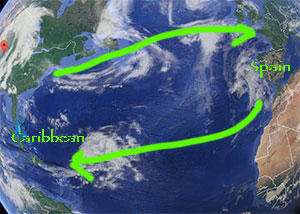 With the compass, Christopher Columbus was able to use wind patterns to help him: he realized (or somebody told him) that the wind generally blew west from Spain to the Caribbean and Florida, so you could get there using square sails with the wind behind you.

When you were coming back, if you headed north first, the wind would blow east from New York to England, and again the wind would be behind you and blow you home. Both Vasco da Gama and Columbus used three masts, the two front ones with square sails, and the back mast with a lateen sail, just in case.