What is an astrolabe? Greek science

Who invented the astrolabe?

About 140 BC, the Greek astronomer Hipparchus of Rhodes invented the science of trigonometry.

Hipparchus figured out that you could use an imaginary right triangle whose corners were the sun, the earth, and the planets or stars, to calculate the movements of the planets and stars.

What does an astrolabe do?

To measure the angles of these right triangles accurately, Hipparchus invented a metal tool called an astrolabe. It’s a kind of analog calculator, like a slide rule. Or it’s like a very complicated protractor. 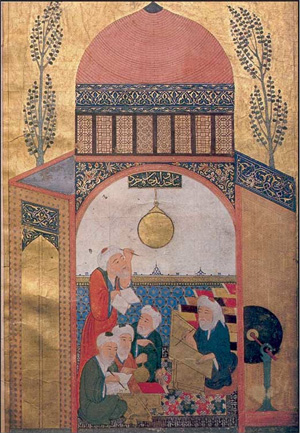 Islamic astronomers, with a gold astrolabe hanging from the ceiling

Improvements to the astrolabe

Later West Asian scientists, first Greek, then Christian, then Muslim, made gradual improvements to the astrolabe over the next thousand years.

Islamic astronomers added markings so that you could find how far away from due north you were.

In the late Middle Ages, Chinese scientists shared the idea of making a magnetic compass with Islamic astronomers and from there the news spread to Europe.

How does a compass work?
What is magnetism?
More Chinese science
Islamic astronomy

Then sailors – or at least highly skilled navigators – were able to combine the use of the astrolabe with the use of the compass to figure out where they were on the ocean when they couldn’t see the land.

Learn by doing: making a compass
More about Greek astronomy

Bibliography and further reading about astrolabes: