What are magnets? Physics and electricity 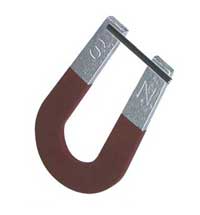 A magnet holding a steel bar – what are magnets?

Magnetism is a force created by electricity, or more specifically by electrons. In any iron atom, there are 26 electrons. Each electron has a tiny bit of negative charge. The way these electrons behave is impossible for us to imagine, because it’s not like anything we can see.

What is a nucleus?
How does electricity work?
What is momentum?

Why are magnets made of iron?

More about iron atoms
History of iron and steel 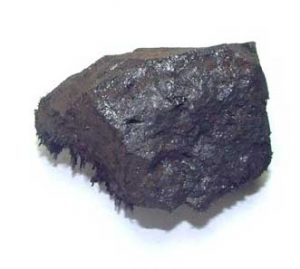 Many objects in space are magnetic. The Sun, for instance, is very magnetic, because there are places on the Sun where there are a lot of extra electrons or protons. The whole Earth is also highly magnetic, although Mars and Venus are much less so. The Earth’s magnetism pulls negatively charged things like electrons toward the North Pole and positively charged things like protons toward the South Pole. Liquid iron inside the Earth creates (and sometimes changes) the Earth’s magnetism. (But no, it’s not magnetism that pulls the Earth to go around the Sun. That’s gravity.)

More about the sun
And the earth
And other planets
What is gravity?

What is a lodestone?

Small iron rocks on the surface of the Earth are also sometimes naturally magnetic, with their electrons naturally happening to spin all the same way. We call these natural magnets lodestones.

Until about two hundred years ago, people made magnets by finding a lodestone and rubbing iron on it. The rubbing lined up the electrons of the iron so that all the electrons would pull in the same direction. One important early use for magnets was to make a magnetic compass. Scientists in China invented the compass. When Europeans learned about the compass, they used it to help ships know where they were going, so they could sail all over the world on the oceans.

Today we can use electricity to make magnets, so we don’t have to look for lodestones anymore.