What’s the sun made of? – Astronomy – Science

The sun from space

The Sun is a star, just like billions of other stars in the universe. Our Sun probably formed a little more than four and a half billion years ago, just a little bit before the planets formed around it. It’s not one of the older stars in the Universe. Probably some of the earliest stars went supernova, and then new stars formed out of those nebulae, and then the new stars went supernova, and the Sun formed out of one of these new nebulae. So you could say that the Sun is like the grandchild of the first stars.

Like other stars, the Sun is mostly made of hydrogen atoms. All stars start out making energy by changing hydrogen atoms into helium atoms. At the surface, the Sun is almost 10,000 degrees Fahrenheit (more than 5000 degrees Celsius), but it is much hotter in the middle of the Sun, about 25 million degrees Fahrenheit (14 million degrees Celsius). The Sun is one of the brighter stars in the Universe, because many other stars are older and have already turned into red dwarfs. 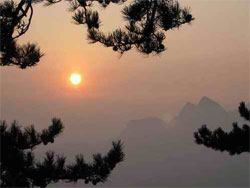 Like other stars, the Sun is not standing still in space. The Sun orbits in a slow circle. The Sun is orbiting around the center of the Milky Way galaxy. It takes the Sun about 225 to 250 million years to go all the way around its orbit, so the last time the Sun was at this point on its orbit was when the dinosaurs were alive.

Most of the energy on Earth comes from the Sun’s rays – sunlight. Sunlight is made of photons that shoot out from the Sun. The photons go in all directions, but some of them come and hit the Earth. Plants use some of these photons in photosynthesis to make new proteins so they can grow and reproduce to make new plants.

Our Sun has already changed about half of its hydrogen atoms into helium atoms. When the Sun uses up all the hydrogen atoms, about four and a half billion years from now, the Sun will become a red giant star, because it’s not a big enough star to explode in a supernova. When this happens, the Sun will send more heat farther out into space, and Earth will get too hot for anybody to live on it. By that time, hopefully people will have figured out how to live on other planets.

Bibliography and further reading about the sun: