What is a galaxy? – Astronomy – Space science 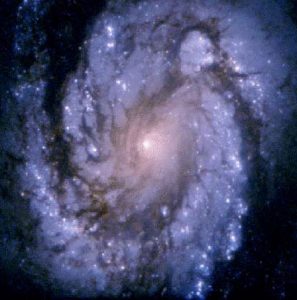 The galaxy M 100, seen through the Hubble telescope

What is a galaxy?

A galaxy is a group of millions of stars that are relatively near each other. Most stars seem to be in one or another galaxy. Earth‘s own star, the Sun, is in the Milky Way galaxy.

What is the sun made of?
What are stars made of?
All our Physics articles

How many stars are in a galaxy?

Small galaxies have about ten million stars, while big galaxies sometimes have a trillion stars in them. There are probably more than a hundred billion galaxies in the Universe.

How do big numbers work?

What is gravity?
More about planets
What are black holes?

What are light waves?

Galaxies also often attract each other with gravity, so that they are not evenly distributed through space. Some parts of space have clumps of galaxies in them, while, even with so many galaxies, most of the Universe is still empty space with pretty much nothing in it at all.

Bibliography and further reading about galaxies and stars:

More about Stars
What is Space?
Physics
Quatr.us home