Math was a very exciting subject to be working on during the Middle Ages in Europe. Little by little, math experts in Europe were learning from Islamic math experts about what we call Arabic numbers (0,1,2,3,4,5,6,7,8,9) (though the numbers came originally from India).

Leaning Tower of Pisa (built while Fibonacci was a child)

The first of these experts was Adelard of Bath, from England, who followed the First Crusadeto the Fatimid Empire in the early 1100s and learned Greek and Arabic mathematics there. When Adelard came home in 1126, he translated Euclid from Greek to Latin so Europeans could read it.

In the 1140s, Robert of Chester travelled from England to Almohad Spain, where he learned Arabic and studied at Arabic universities. When he came home, he translated Al Khwarizmi‘s book on algebra into Latin, so Europeans could study it.

Soon after this, Fibonacci of Pisa brought Arabic numbers to Italy. As a teenager, Fibonacci travelled with his father, a rich trader, to the Almohad kingdom in North Africa, and he learned about the new Arabic numbers there. He saw that these numbers were important, and he travelled alone all around the Mediterranean to learn more about mathematics from Islamic mathematicians. In 1202 AD, Fibonacci came back to Italy and published a book explaining about these new numbers, which he (correctly) called “Indian numbers”. By now Arabic numbers were beginning to really catch on in Europe.

You could use these new numbers to do all kinds of new math. Mathematicians began to work less on the traditional problems of geometry and more on the new problems of algebra. 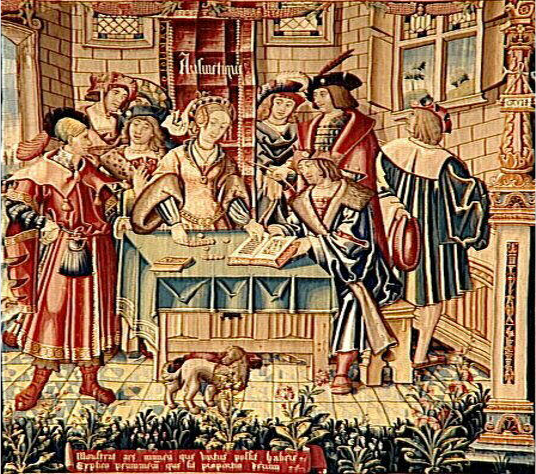 Tapestry of “Arithmetic” from Flanders in the 1600s. The spirit of Arithmetic is showing men how to use Arabic numbers. Now in the Cluny Museum, Paris.

By the 1300s, Europeans working at the new European universities were starting to create and solve their own math problems instead of just studying Islamic math. In the 1350s Nicole Oresme, in France, began developing the x-y-z coordinate graph system, combining algebra and geometry.

A hundred years later, in the 1450s, the German scholar Johann Müller (the son of a miller) recognized the need to push trigonometry forward in order to work on astronomy, and published a book on triangles and the sine function, and spherical trigonometry.

But even though mathematicians in Europe were all excited about the new Arabic numbers, most store-keepers and bankers still used the old Roman numerals and the abacus right up to the end of the Middle Ages. And most people – farmers – did not even know how to write down any kind of numbers, though they did know how to count out loud.

Learn by doing: Using an abacus
Go on to Renaissance math

Bibliography and further reading about math in medieval Europe: