How to make an abacus – Ancient China project 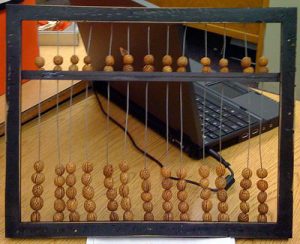 Who invented the abacus?

People in China started to use an abacus to help them with math problems maybe as early as 500 BC. Nobody knows whether somebody in China invented the abacus. Maybe they learned about it from people in the Persian Empire (modern Iran), who started using the abacus about the same time.

Whoever invented the compass probably started by counting on their knuckles. You have twelve knuckles on each hand, so you can use them to count to 24. Twenty-four has a lot of factors, so you can do a lot of arithmetic quickly – as quickly as on a calculator – if you know how. An abacus may have started as a sort of artificial set of hands. By the 100s AD, accountants and business people were using the abacus in the Roman Empire, too.

Find out how to use an abacus for adding big numbers quickly.

You can make your own abacus.  Start with a wooden picture frame. Fit another piece of wood across it the long way so it fits tightly. You can glue it and nail it in place with small nails. Drill small holes all along the inside edges, and cut wires to fit. String beads on the wires and jam them into the holes.

A simple abacus that really works 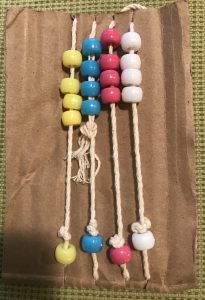 How to make your own abacus from cardboard, kitchen twine, and beads

For a simple working abacus that kids can make and use in one class period, cut rectangular squares of box cardboard, about the size of a pocket calculator (or a cell phone). In each of the short ends, cut four slots. Cut a piece of kitchen string (or yarn) about a meter long. Tie a knot in one end of the string, and push it through one of the end slots. Add four beads to the string, tie a knot, and add one (or two) more beads. Press the string into the opposite slot, at the other end of the cardboard, and wrap it around the back. Repeat three more times, and tie the end of the string off to one of the other strings on the back.

How to use this abacus

Start with all of the four-bead groups pushed to the top, and all of the one (or two) bead groups pushed to the bottom, so they are as far apart as they can go. To count, move one bead at a time from an outside row down to the middle, one-two-three-four. For five, move the bottom bead from the outside to the middle, and slide the others back to the top again. Move them back down the middle one at a time: six-seven-eight-nine, and then move the bottom bead back to the outside again, and move one bead in the second column down to the middle – that’s ten.

Another China project: making a compass