Math and Numbers in Ancient China 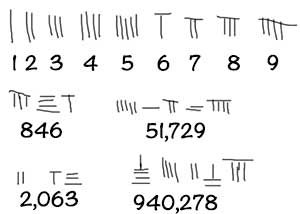 Nobody knows whether people in China thought of the idea to write numbers for themselves. Maybe they learned it from people in West Asia or India. Chinese people counted in base ten, like people in India. But the Chinese system was more efficient.

How to use Chinese number rods

For calculating, Chinese people used number rods: they arranged short bamboo rods in patterns, with the numbers from 1-10 represented by horizontal rods, while the tens place had vertical rods, and the hundreds were horizontal again (6-9 are upside-down versions rather than really horizontal). There was no mark for zero, but you left a space, and having two horizontal or two vertical places next to each other showed that there was a space left.

Number rods on the Silk Road

Empires timeline 500 BC
What is the Silk Road?
Central Asian science

About this time, in the early Han Dynasty, Chinese scholars began to write math textbooks. Silk Road traders and Chinese government administrators used these math books – they needed to know how to keep accounts, survey land, and generally run the government. The earliest Chinese mathematical textbook is called the Nine Chapters; it includes a chapter on how to solve simultaneous equations (more than one algebraic equation at the same time).

After the fall of the Han Dynasty in the 200s AD, the Chinese mathematician Liu Hui calculated the volume of a cylinder. By 450 AD, Zu Chongzhi built on Liu Hui’s work to figure out what pi was to seven decimal places, and to calculate the volume of a sphere (as Archimedes had done 700 years earlier).

Under the Song Dynasty, there were many math colleges or institutes in China. In the 1200s, the mathematician Qin Jiushao worked on solving quadratic equations like x2 + 2xy + y2, cubic equations with x3 and on up to tenth order (x10) (which again had been done by Euclid in Africa about 1400 years earlier, or maybe even earlier by Pythagoras). Qin Jiushao also brought the use of zero from India to China, just about the same time that it first reached Europe.

What are quadratic equations?
Who was Euclid?
Invention of zero

About this same time, people in China began to use the abacus. Nobody knows whether the abacus was invented in Iran or in China.

What is an abacus?
Medieval Islamic mathematics

If you knew how to use it, the abacus was very fast, almost like a modern calculator. Eventually most people in China stopped using the counting rods and started to use the abacus instead.