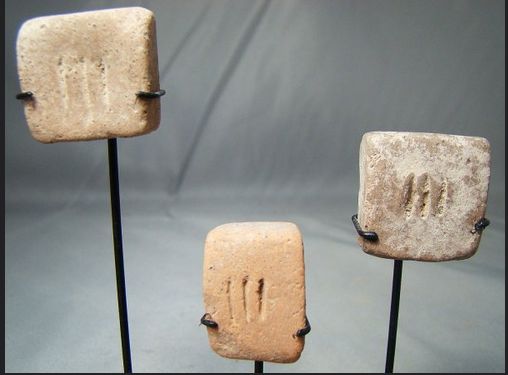 Indian counting tokens and base 10

The first Indian numbers appeared in the late Stone Age, about 4000 BC. Around this time, people at Mehrgarh began to use counting tokens. (People were already using these tokens in West Asia.)

Where was Mehrgahr?
Indian history articles

Soon afterwards, Indian people changed over to writing their numbers down, using pictographs. The Harappans in the Bronze Age developed standard weights (like our ounces and grams).

Who were the Harappans?

The Harappans were the earliest people to use base 10 for their weights. They used weights in multiples of 10 and 100, rather than 12 and 60 as they did in Mesopotamia.

After climate change caused the Harappan civilization to collapse, about 2000 BC, some Indo-Europeans moved to India.

Who were the Indo-Europeans?

These Indo-Europeans may have brought new Babylonian mathematical ideas to India.

As in Babylonia, Indian scientists made a lot of progress in geometry as a result of interest in astronomy.

The history of astronomy

By 300 BC the Indian astronomer Lagadha used geometry to write a book of rules to predict the movement of the sun and moon as they seemed to move around the earth. (Nobody knew yet that the earth goes around the sun.) Did Lagadha work these rules out on his own? Or did he learn about them from the Babylonians? Nobody knows.

Indian combinatorics (the beginning of statistics)

Around 300 BC, when Chandragupta was ruling India, Indian mathematicians began working on the mathematical idea of combinations. This is the study of how many combinations you can make out of the same group of things.

Chandragupta and the Mauryan Empire

For example, how many different poker hands can you make out of a pack of cards? Or, what are the chances that in any class of thirty kids, some of them will share the same birthday? Indian mathematicians worked on how you could figure that out. They published their ideas in a book called the Bhagabati Sutra.

Around the same time, Indian mathematicians worked out the first beginnings of our modern number system. By 100 AD, people in India were writing the numbers as in the picture here. They pretty clearly took the numbers 1, 2, and 3 from Chinese numerals. Nobody knows where the other signs came from. Maybe they came from letters of an Indian alphabet.

The invention of zero

Indian mathematicians’ biggest contribution was the use of zero as a placeholder. Zero made it easier to add and multiply numbers. Our word “zero” comes from the Sanskrit word meaning “nothing.”

More about the number zero

A generation later, about 500 AD, the Indian mathematician Arya Bhata improved on Hipparchus and Ptolemy‘s trigonometry. He developed the ideas of sines and cosines, tangents and cotangents.

Find out more about Arya Bhata
What are sines and cosines?

Arya Bhata wrote the first table of sines in order to help with his work in astronomy. Arya Bhata also worked on ways of measuring time. And he worked on improving our understanding of place value and zero.

Then in 628 AD, Brahmagupta wrote a book explaining how zero worked. He wrote rules like “The sum of zero and zero is zero” and “The sum of a positive and a negative is their difference; or, if they are equal, zero.”

Did you find out what you wanted to know about Indian numbers and the invention of zero? Let us know in the comments!