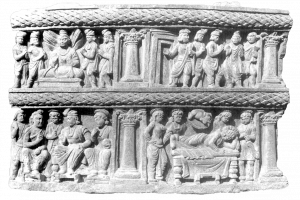 The Mauryan Empire collapsed about 150 BC, but India remained a rich place thanks to Silk Road trade. Indian artists kept right on carving new sculptures. Sometime around 50 BC – 50 AD, they started to carve narrative scenes that went together, like the panels of a graphic novel today. For example, they carved scenes from the life of the Buddha. This sort of graphic novel roll-out then appears a little later on Trajan’s Column in Rome (just after 100 AD). 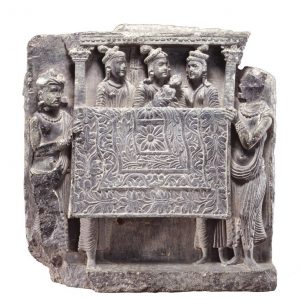 Here’s another scene from the life of the Buddha, from about the same time and place. Here the Buddha is returning to Kapilavastu, to see his father and his wife and child for the first time since he decided to give up his life as a prince. As was usual at this time, the relief doesn’t actually show the Buddha. But we can imagine him standing just about where we are, looking at his wife holding his baby in the palanquin, with a fancy Persian carpet thrown over the side.

By the 200s AD, when this carving was made, the style is very different from the Mauryan reliefs. Instead of a scene with a few large figures, now we have smaller figures and more crowded scenes. We might compare this style to the carving on the Roman Arch of Septimius Severus from the early 200s, or the Arch of Constantine, just a little later in 312 AD.

Learn by doing: string glass beads into a bracelet
More about Buddhism
More about Indian mathematics
More about Guptan India