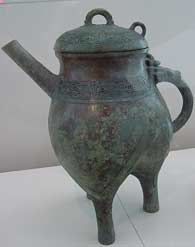 More about Chinese writing
What is bronze?
Stone Age China
All our China articles

Like Sumerian and Egyptian writing of this time, Chinese writing is based on pictures that stand for ideas or sounds. Priests used oracle bones – bones with writing on them – to tell fortunes.

People also wrote on bones and tortoise shells to keep records about who paid what to who, much like Linear B tablets in Greece at the same time.

It’s likely – though nobody is sure yet – that the reason people in China began using bronze and writing about 2000 BC is that they were talking to the same people who brought writing to Greece about the same time – the Indo-Europeans (the Yamnaya). 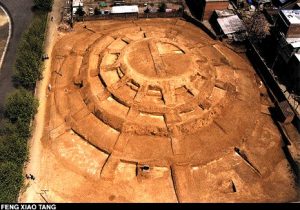 During the Shang Dynasty, people also began to use horse-drawn chariots with spoked wheels. Central Asian people invented chariots about 2500 BC. Probably those same migrating Indo-Europeans rode their chariots to China and to West Asia soon afterwards.

More about horses and chariots
History of money

People in China used jade (a green stone) for jewelry and decoration, and probably as a kind of money.

By about 1800 BC (the traditional date is 1766 BC), the Shang had become the first to unite a big part of China under one king. Probably they used their great new military weapon, the chariot, to conquer China. Under the Shang, China’s influence reached south into Vietnam, where people also started to grow rice, make pottery and use bronze tools and weapons.

Reconstruction of the Shang palace or temple at Panlongcheng

The king had his capital in Anyang, in northern China. People had already begun to divide up into the rich and the poor. We know that some people were slaves under the Shang. Many men were in the king’s armies.

The end of the Shang Dynasty

The Shang Dynasty ruled China for about 700 years. But finally the Zhou conquered them, about 1100 BC.

Learn by Doing – horse-drawn chariot project
Did you understand this page? Take the quiz and find out!

Bibliography and further reading about the Shang dynasty in China:

The Cambridge History of Ancient China : From the Origins of Civilization to 221 BC, by Michael Loewe and Edward L. Shaughnessy (1999). A more challenging read, and much more expensive, but it has all the good solid reliable information you could want.