What was the religion of ancient China? 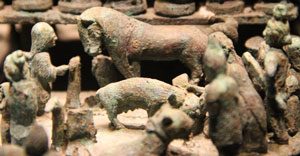 In the Shang Dynasty (about 2000 BC), the earliest period we know much about, people in China worshipped a lot of different gods – weather gods and sky gods, and also a higher god who ruled over the other gods, called Shang-Ti.

Who are the Chinese gods?
More about the Shang Dynasty
All our articles about China

What was animal sacrifice? 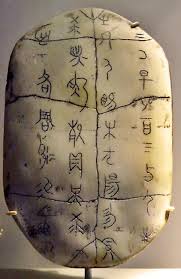 Early Chinese writing: an oracle bone with Chinese characters written on it

Around 1500 BC, people began to use written oracle bones to try to find out what was going to happen in the future.

By the time of the Zhou Dynasty (about 1100 BC), the Chinese were also worshipping a natural force called t’ien, which we usually translate as Heaven. Like Shang-Ti, Heaven ruled over all the other gods. Heaven also decided who would be the Emperor or Empress of China.

What was the Zhou Dynasty?

The Mandate of Heaven

Around 600 BC, under the Eastern Zhou Dynasty, and for the next two hundred years, there were a lot of new ideas in Chinese religion. The first big empires were forming. Philosophers responded to the idea of bigger nations with bigger religious ideas.

What is an empire?
History of philosophy 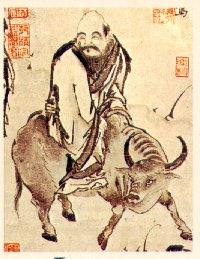 First, a Chinese philosopher named Lao Tzu (who may be mythical) created the philosophy of Taoism. Taoism became very popular. Taoism holds that people should not try to get their way by force. Instead, they should use compromise and natural forces to find their way.

Taoism is partly a philosophy, and partly a religious faith. Taoists believe that there is a universal force flowing through all living things. Respecting that force is essential to a happy life. Taoists also didn’t think sacrificing animals to the gods was a good idea. So sacrifice gradually went out of fashion in China (as well in most of the rest of Asia, Africa, and Europe)

How did sacrifice go out of fashion?
More about Taoism

More about Confucianism
Who was Confucius?

Confucianism holds that people should do their duty. They should follow their leaders and the gods faithfully. Order is the way to peace. If everyone just does what they are told, and what they are supposed to do, there won’t be any fighting and nobody will be upset. Naturally Confucius supported traditional animal sacrifice, but people gradually stopped doing it anyway.

There were two other important philosophical schools of this period. One was started by Mo Tzu, which suggested that the way to happiness was for everyone to treat all other people as well as they treated their own families.

The other was Legalism (a kind of Confucianism), which believed that people were all basically bad, and needed to be kept in line by strict laws and harsh punishments in order to create order and peace. Legalism was very important in the way the Qin Dynasty worked (about 220 BC). The Qin are the ones who built the Great Wall of China, to keep out bad foreigners.

More about the Qin Dynasty
What was going on in the 200s BC?

What is the Silk Road?
What’s the Qingming festival?
All about the Han Dynasty

Many parts of the Qingming Festival, like dyeing eggs, came from West Asian festivals. But these new philosophies and festivals did not end the old religious practices. Everybody kept on worshipping their ancestors and the traditional Chinese gods, and they kept on believing in the Mandate of Heaven.

History of Easter eggs
Who are the Chinese gods?