Where do Easter eggs come from? History of religion 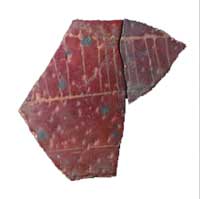 When did people start dyeing eggs?

Easter eggs go back long before Easter, and even long before the beginning of farming. As long ago as the Paleolithic, about 60,000 BC, people in Africa were scratching patterns and lines on ostrich eggs, though nobody knows what they had in mind. By the later Stone Age, around 4400 BC, people in Sudan and Egypt thought of ostrich eggs as symbolizing rebirth and life after death.

When did eggs evolve?
Early African religion
All our Africa articles

Painted eggs in the Bronze Age

By the Bronze Age, people were using ostrich eggs in Crete and in Greece, and putting painted ostrich eggs in tombs in Susa (Iran). People thought of ostrich eggs as apotropaic – pushing away evil – and as being appropriate for graves, because they signified rebirth.

Nowruz and painted eggs
The Qingming festival in China

The Zoroastrian spring holiday of Nowruz has always involved painted eggs. With the rise of the Silk Road, ostrich eggs from Iran reached China, where they were a sort of fad item for rich people under the Han Dynasty. Chinese people started to dye eggs for the spring Qingming festival. 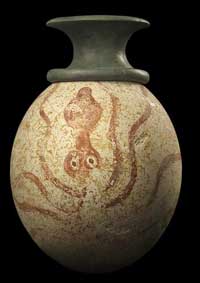 Buddhist monasteries in India and Tibet (at Tashilumpo) also collected African ostrich eggs, probably also because they symbolized rebirth. When people started to build Christian churches in the 200s and 300s AD, they hung ostrich eggs in them to remind people of Jesus, who died and was reborn.

What is Buddhism?
Christianity under Rome

A few years later, in the time of Mohammed (and maybe for centuries before that), people in Mecca hung ostrich eggs in a special tree. By the 700s AD, Islamic shrines also had ostrich eggs hanging in them. When Islam reached India about 1000 AD, people in India added ostrich eggs in their mosques, often as souvenirs of the hajj to Mecca.

More about Islam
What is a mosque?

By the early 1300s AD, both Islamic and Christian people in Mamluk Egypt were painting ostrich eggs for Maundy Thursday (the Thursday before Easter Sunday, when the Last Supper was held). 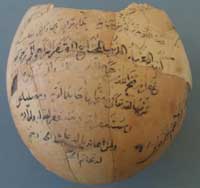 Egypt was very rich at this time, selling paper and sugar to Italy. Egyptians raised a lot of chickens, and maybe that’s when people started to paint chicken eggs as well as ostrich eggs. Conveniently, Easter was also the time of year when hens began to lay eggs again after not laying much during the winter, so eggs were exciting and new in the spring.

Why do the seasons change?
Where are chickens from? 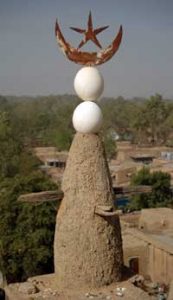 Ostrich eggs on top of the Great mosque of Niono, Mali

From Egypt, traders and travelers brought the tradition of painting eggs – some real eggs and some made of clay – to Europe. In 1307, King Edward I of England spent “18 pence for 450 eggs to be boiled and dyed or covered with gold leaf and distributed to the Royal household.”

But priests and imams also hung up ostrich eggs in both churches and mosques, as a symbol of rebirth. 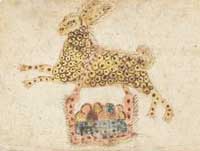 Easter eggs in the Americas

Spanish and Portuguese invaders brought Easter egg coloring to North and South America in the 1500s AD. Puritans, in England and America, didn’t dye eggs, but by the 1700s German and English settlers who weren’t Puritans had brought the idea to the Atlantic coast.

Who were the Puritans?
German immigrants

The Easter bunny, a German tradition, probably also came to America with the first German immigrants to Pennsylvania in the 1700s.

But check out mainly Nile Green’s 2006 article on ostrich eggs and peacock feathers.