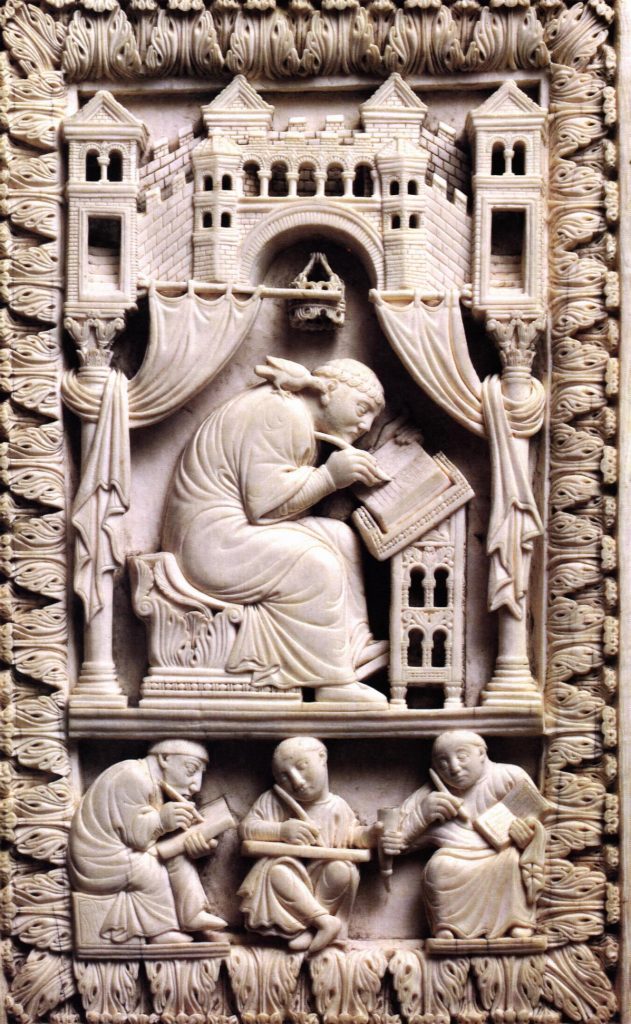 Pope Gregory the Great writing, carved near Strasbourg, about 875 AD. That’s under Charlemagne’s grandchildren. The Holy Spirit (in the form of a dove) sits on his shoulder and dictates to him. The elephant ivory is probably from Kenya. (Now in Vienna Kunsthistorisches Museum)

Who was Gregory the Great?

Gregory was Pope in Rome beginning in 590 AD. That’s just after the arrival of the Lombards in Italy.

What is a pope?
Who were the Lombards?
Early medieval timeline
All our medieval Europe articles

Gregory saw that with Western Europe now pretty much free from the control of the Roman Empire, there was room for the Pope to be more powerful than before. So he took this chance to make himself (and later Popes) more powerful.

Gregory as a young man

Gregory came from an old Roman senatorial family. He had been the prefect of the city of Rome while he was still a young man, about 560 AD. (This was about the time that the Ma’rib Dam collapsed in Yemen.) Then he decided he wanted to be a monk instead and entered a monastery, where he devoted himself to prayer and simple living. (The prophet Mohammed was born about this time.)

But the old Pope decided Gregory should be a leader of the Church instead of being a monk. The Pope made Gregory leave his monastery and go to Constantinople as the Pope’s messenger.

What was up in Constantinople?
Who was Job?
What is Purgatory?

While he was in Constantinople, Gregory wrote an important book, a commentary on the Book of Job in the Bible, that laid out Christian ideas like Purgatory in simple ways that everyone could understand. Purgatory, according to Gregory, was where you went after you died if you had been bad, but not super bad. You could work off your badness there and then go to Heaven after a while. The idea of Purgatory gave people hope that they would not burn in Hell forever.

How did Gregory become the Pope?

In 590, a terrible plague hit Rome, and the old Pope died. The bishops elected Gregory to be the new Pope. The Roman emperor agreed that he could be Pope. So Gregory took power in Rome. Soon he controlled a lot of Italy. He was not just a religious leader but also the main political power – the main government – in all of central Italy, the whole area around the city of Rome. Under Gregory’s leadership, the Christian church collected taxes and tithes, held court trials, ran schools, repaired roads, provided charity, and generally kept things moving.

The Black Death
Who are bishops?
Medieval schools
Medieval government
What was Arianism?

The new Pope also wrote a lot of good advice for people. One of his famous sayings is the Latin phrase age quod agis, which means “Do what you’re doing.” He meant that you should focus on what you are doing now, do it well, and be present, and not multi-task or worry about the past or the future.

Gregory tried to extend the power of the Church all over the Western Mediterranean. He wrote many letters to powerful people in France. Those were the Franks. He wrote letters to the rulers of Spain – the Visigoths. And he sent letters to the rulers of North Africa,  the Vandals. He tried to end the Donatist controversy in Africa, which was still going on. It was during his reign that the Visigoths converted from Arianism to Catholicism.

Pope Gregory died in 604 AD, when he was about 65 years old. About ten years after he died, Mohammed the Prophet started the new religion of Islam in the Arabian Peninsula. The Popes stayed powerful in Italy for a long time, but they slowly lost the power Gregory had built over Africa and Spain as people there converted to Islam.