Who was Job? Bible stories 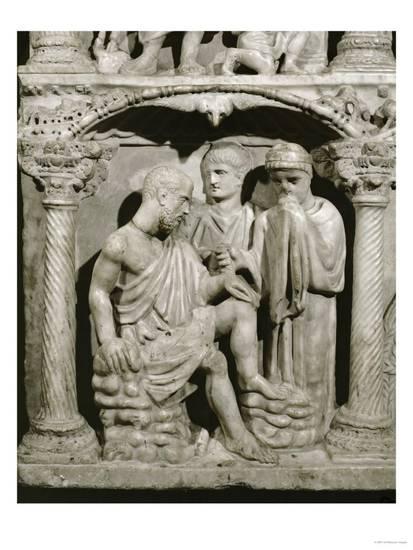 Who was Job? Job sits on a dungheap, from the sarcophagus of Junius Bassus, 359 AD, Rome – Job in the Bible

Why did God let bad things happen to Job?

According to the Bible, Job was a rich farmer, with a wife and ten children, and many sheep and goats. He loved God and prayed to him all the time. One day Satan (the Devil) came to God and suggested that Job (pronounced like the name JOE but with a B on the end) only loved God because God was so nice to him and gave him so much stuff. “Take away his nice farm and his children,” said Satan, “and he’ll hate you then.”

Where do sheep come from?
History of the Jews
West Asian religions
All our West Asia articles

God said that Job was stronger than that, and let Satan go ahead and try. Satan stole away all of Job’s sheep and goats, and killed his children. Job was very sad, but still he loved God.

Then Satan sent a horrible rash to cover Job’s body. Still Job loved God. Job’s wife thought he was stupid to still pray to God. Job’s friends came and said he was being stupid too. Finally Job broke down and cursed the day he was born.

The story of Job

How does God explain this?

Then God appeared and told Job to shut up. “What do you know about why I do things? You’re just a little man, and I created night and day and the sun and the moon and the earth! How could you ever possibly understand why I do things?” Then Job understood that people just can’t understand why things happen, and God wants people to have faith in him anyway, even if what happens doesn’t seem to make any sense. And God gave him back twice as much stuff as he had before, so he was rich again.

The story of Creation

Where does the story of Job come from?

Most likely the story of Job was put together out of pieces of older stories, sometime around 500 BC, about the time of the Babylonian Captivity. This was a time when many Jews were wondering what they had done wrong to lose their country, and trying to make peace with their God. This was also a time when Jewish people were first beginning to think about Satan, and divide the world between good and evil, the way Zoroastrians did.

Compare the story of Job in the Bible to the much earlier West Asian story of Gilgamesh, who also loses a friend and curses the gods, and then realizes that this is pointless. And also compare Job’s story to the Buddhist story of Vessantara, who gives away all his belongings – even his children and his wife – to get closer to God. (How does it change the story for you if Vessantara gives away his stuff instead of having it taken from him?) But probably people have been thinking about why bad things often happen to good people since people first started to think about anything.

The Epic of Gilgamesh
The Buddhist story of Vessantara

Did you find out what you wanted to know about the story of Job? Let us know in the comments!