Creation and the Jewish Bible 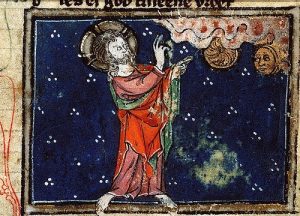 God creates the Sun and the Moon, in a medieval European painting

What is Chaos?
More about the Jews
West Asian religion
All our West Asia articles

Jewish creation and the Sumerians

Jewish ideas about the beginning of the world are similar to Sumerian beliefs. This is not surprising, because, at least according to the Bible, in these very early times the Jews lived in the Persian Gulf area (modern Iraq) with the Sumerians.

Who were the Sumerians?
The Enuma Elish

How long did God take for creation? 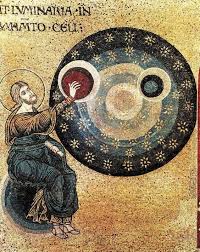 Another version of God creating the sun and the moon and the stars (Monreale chapel, in Sicily)

The Bible says that God created the world in seven days.

On the first day, God created the Heavens and the Earth: that is, He separated the light from the darkness (compare Zoroastrianism).

Day 2: The sky and the earth

On the second day, God separated the sky from the earth (compare the Greek version). 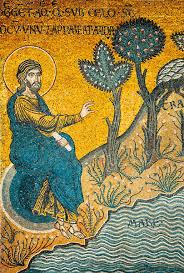 Day 3: The water and the land

On the third day, God divided the water from the land, and made the plants and the trees and flowers.

Day 4: The sun and the stars

Then on the fourth day, God created the sun and the stars.

On the fifth day, God created animals, and fish and birds and snakes.

On the sixth day, God created man, and (possibly a little later) woman.

And on the seventh day He rested (this is why some Jews rest on Saturdays).

Go on to Adam and Eve
More about Judaism
Quatr.us home