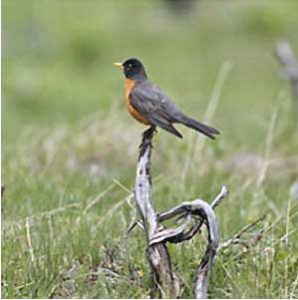 A robin sits on a branch: birds biology

When did birds evolve?

The first birds evolved out of earlier small dinosaurs late in the Jurassic period, about 150 million years ago. At this time, most of the bigger animals on Earth were dinosaurs.

Really, dinosaurs?
The Jurassic period
All our biology articles

How are birds the same as dinosaurs? 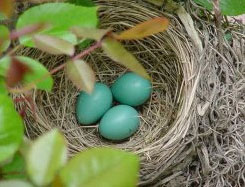 A robin’s nest with three eggs in it

More about eggs
And about feathers
Jaws and teeth evolve

Why do birds eat bugs?

Birds ate the same things as small meat-eating dinosaurs – worms and small insects like flies, grasshoppers, bees and mosquitoes, and meat from dead reptiles and mammals and frogs. Sea birds also ate mollusks like clams and mussels. There were a lot of bugs around in the Cretaceous period, when a lot of birds evolved. Flowering plants were evolving, and bugs evolved to eat their nectar. Then  birds evolved to eat the insects.

Most birds are still wild. But people have gradually domesticated a few types of birds. Chickens and turkeys, especially, survive mainly as farm animals today.

Bibliography and further reading about birds: