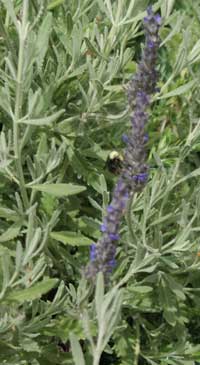 Before there were flowers…

For millions of years, the Earth was covered with ferns and pine trees and moss and mushrooms, without any flowers, grass, or fruit.

Gymnosperms
What is moss?
What are mushrooms?
Evolution of ferns
All our biology articles

When did flowers evolve?

But about 120 million years ago, in the Cretaceous period, some of these pine trees developed a new way to scatter their seeds that turned out to be very successful – not just cones anymore, but flowers and fruit.

How did plants get the energy to make flowers?

These flowering plants needed extra energy to make flowers and fruit instead of cones. They got that energy by making less pollen than the conifers made. Conifers, which have only the wind to spread their seeds, must make huge amounts of pollen to make sure some of it gets to the eggs to fertilize them (one of the main causes of hay fever is all that pollen in the air).

Bees pick up the pollen

Flowering plants use bees to pick up the pollen instead, so they can save energy by making less pollen. They use that energy to make beautiful flowers with sugar-water nectar (and also addictive drugs like nicotine, caffeine, and opium) to attract the bees.

More about tobacco
And about coffee
And opium
Also marijuana

But no matter how good an idea flowers were, it would have been impossible for them to evolve any earlier than they did, because flowering plants needed bees to land on them and carry their pollen from flower to flower, and until the Jurassic period, just before the Cretaceous, there weren’t any bees.

Other kinds of flowering plants

Where are apples from?
More about figs
And about sunflowers
What about tomatoes?

They even include all of the grasses like rice, corn, wheat, and barley and millet and sorghum and nettles and plain grass that grows on your lawn. (Grasses don’t depend on bees to pollinate them, though: they release their pollen in the wind or just pollinate themselves, from flower to flower on the same plant.)

Where is sorghum from?
History of rice
Where does wheat come from?
More about corn

All of these are flowering plants, and they all evolved during the Cretaceous period, in the last days of the dinosaurs.

Where does cotton come from?
History of linen
And what about wool?

We make our clothing out of flowering plants, too – mostly cotton, but also flax for linen. Our wool comes from sheep who also eat grass.

Bibliography and further reading about flowers: