What are ferns? Plant biology and evolution 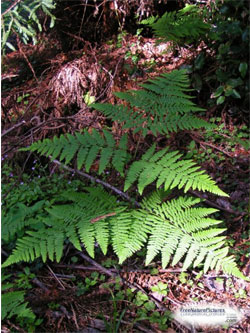 What are ferns? Ferns growing in a forest

When did ferns evolve?

The first ferns – the first plants that had leaves – evolved from plants that were more like moss. Ferns evolved about 360 million years ago, during the Carboniferous Period.

Where do ferns grow?

Like moss, most ferns grow in places where there is plenty of water: usually near the banks of streams. When they first evolved, all plants had to live near water. But eventually some ferns were able to figure out how to live in dry places too.

Many ferns had underground stems, like mushrooms. Ferns also had roots like the roots of trees or flowers, so they could pull food in from the dirt through their roots. Having leaves gave the ferns a much broader surface to collect sunlight for photosynthesis. This gave the ferns a big advantage over earlier plants like moss.

What is photosynthesis?
Sunlight and energy

Because ferns evolved in a time when the only plants growing on land were moss and fungi like mushrooms, many ferns developed relationships with fungi. Some ferns can’t live without their companion fungus that protects them and gets them food. Most of these fungi live on the roots of the ferns.

Mushrooms and other fungi

During the Jurassic era, when the dinosaurs were alive, most of the plants were ferns. There were small ferns, like there are today, but there were also giant ferns the size of trees.

More about dinosaurs
The Jurassic period

After flowering plants evolved, about 100 million years ago, they were more successful than ferns and most of the places where ferns and cycads had grown were taken over by the flowering plants. Perhaps in response, ferns evolved quickly into new forms, becoming more like modern ferns.

What are flowering plants?
What are cycads?
The Cretaceous period

Where do ferns grow today?

Today ferns grow mainly in places where flowering plants can’t grow because it is too wet or too shady or the dirt is too acidic, or there isn’t enough dirt (like in cracks in rocks). Some ferns have evolved to live on the flowering plants themselves, growing right on the trunks of living trees. Some ferns evolved into cycads.

So what are ferns? Did you find out what you wanted to know? Let us know in the comments!

Learn by doing: go out in the woods and find some ferns to look at
More about dinosaurs
More about mushrooms and fungus
The next big thing: pine trees!

Bibliography and further reading about ferns: