What are cycads? Evolution and Biology 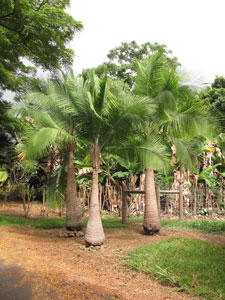 Cycad trees. They look like palm trees but they are very different!

At the end of the Carboniferous period, about 300 million years ago, the only kinds of plants on Earth were mosses and ferns. Some of the ferns were giant ferns as big as trees are now. Then in the late Carboniferous or the early Permian era, the first cycads evolved from the ferns. Cycads look a lot like palm trees, and they were one of the first trees on land.

Cycads did well during the Jurassic, along with the dinosaurs, but then newer kinds of trees – angiosperms – evolved and pushed the cycads aside. Fifteen million years ago, there were hardly any cycads left.

But then a climate change killed a lot of the angiosperms. With less competition, the cycads made a comeback. Modern cycad trees are descended from the species that evolved during that comeback, about 12 million years ago, so they’re not the same as the ones from the Permian. But they still look about the same.

More about the Carboniferous period

Bibliography and further reading about cycads: