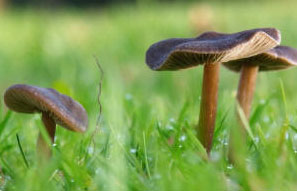 Mushrooms growing in a field

About 600 million years ago, a few eukaryote cells developed into multi-celled creatures. Some of them became animals, and some became plants, and others became mushrooms and the other funguses like yeast.

So mushrooms are not either animals or plants. Mushrooms are actually more closely related to animals than they are to plants.

There are many different kinds of mushrooms, but most mushrooms grow in more or less the same way. Most of the cells of the fungus actually stay underground. They form a long, wide net of cells something like plant roots. The net looks like black shoelaces. These underground nets of cells can live a long time, even thousands of years.

Like other eukaryote creatures, mushrooms use mitosis to grow bigger, and meiosis to produce tiny one-celled spores. The wind blows these spores away from the mother plant so that new mushrooms can grow in new soil.

Most of the spores land on rocks or in water and don’t manage to grow at all. But when a spore lands on dirt or a decaying plant, it starts to eat the molecules in the dirt or the wood and sends a network of cells down into the ground.

The network of cells is only a few cells thick, so each cell can get food and water directly. The network doesn’t need a circulatory system or a digestive system. When the network gets big enough, it sends up more mushrooms out of the ground. These mushrooms produce spores, and the spores blow away to make new mushroom colonies.

Some funguses have evolved to develop partnerships with ferns, which evolved only a little later, so that each of them depends on the other to stay alive.

To keep from being eaten by animals or plants, many kinds of mushrooms have developed poisons so that nothing will want to eat them. It’s hard to tell which mushrooms are poisonous, so you shouldn’t eat any wild mushroom unless someone who knows says it is okay.

More about the Proterozoic

Bibliography and further reading about mushrooms: