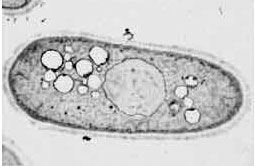 Yeast cells are a very common kind of eukaryote cell. They vary in size, but are usually about four thousandths of a millimeter (4 microns) in diameter, too small to see without a microscope. Yeast are one-celled creatures that eat starches and sugars. Enzymes inside the mitochondria in the yeast cells use oxygen to break up the food molecules into smaller molecules and let out some energy for the cell to power itself. 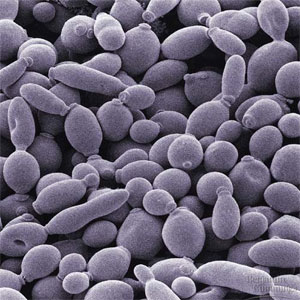 When there’s plenty of food, yeast cells reproduce themselves to take advantage of it. To reproduce, most yeast put out a small bud from one side of themselves, and move a piece of their nucleus into it, and then they gradually pinch off the bud to make a new, smaller yeast cell. Yeast can also reproduce in a more complicated way through meiosis.

Some yeast cells are always floating around in the air, where they are too small for you to see. They like to get into berries and eat them. When they get into a berry or other food, yeast cells eat the starch or sugar and poop out carbon dioxide. That’s what makes champagne fizzy, and it’s what makes bread rise: a lot of carbon dioxide gas in it. (The word “yeast” comes from an old Indo-European word meaning “bubble” or “foam”). All forms of alcohol, like beer or wine, are made by certain yeast that eat sugar and poop out alcohol. Yeasts often get into food when we don’t want them to and make it go bad, like when the cider gets fizzy, or the orange juice tastes funny. When yeasts get a chance to get inside you, they can also cause diseases known as yeast infections. When babies get thrush in their mouths, for example, that’s a yeast infection.