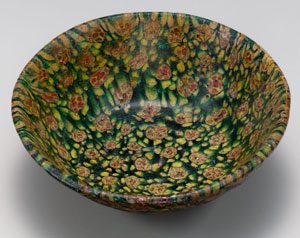 By the 1100s, glass-making was expanding again from West Asia; there were glassworks further east at Kuva in Central Asia (modern Uzbekistan).

Glass-making also moved westward into Europe. By 1000 AD, Venice was a growing center of glass manufacturing. Venice made glass to sell to other places around the Mediterranean. Venetian glass-blowers made glass bowls and cups, and also a lot of fancy glass beads for necklaces and bracelets.

In West Africa, local glass-makers at Igbo Olokun were making their own glass from sand. They also made a lot of glass beads. 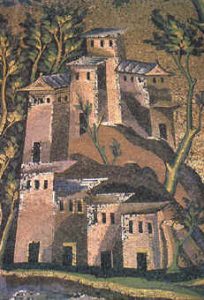 Mosaic from the Great Mosque in Damascus (about 710 AD)

Glass-makers were still making both opaque and transparent glass. The opaque glass made millefiore bowls like this one. Millefiore means “a thousand flowers”.

How do you make millefiore bowls?

You make millefiore bowls by making glass rods in different colors. You melt five or six of those rods together, and slice them like slicing a loaf of bread. That makes the flowers. Then you layer the flowers in a mold, into the shape of a bowl. You heat the mold and the flowers all melt together into one bowl. 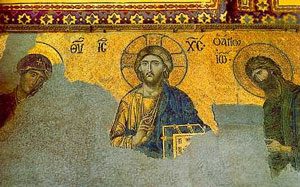 Another use for opaque glass was to make mosaic tesserae. In the Middle Ages, many people all around the Mediterranean were making big wall mosaics with scenes from the Bible, buildings, or patterns of flowers.

What is a mosaic?
More about Hagia Sophia
The Great Mosque of Damascus

Using ashes instead of natron 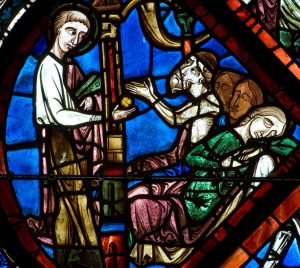 As Europe’s climate improved in the 1200s, Europeans got richer and more educated, and more people started to read, people in Italy began to use reading glasses about 1286 AD.

In northern Europe, glassmakers made beautiful stained glass for cathedrals. They had already been making stained glass windows at least since the 600s AD, but they made a lot more of them for the big cathedrals.

Then, in the 1300s AD, North Africa and West Asia lost control of world trade to Europeans. In the 1500s, Indian traders also lost out on trade, and Britain and Spain took it over.

While West Asia and India became too poor to pay for schools and books, Europeans were rich enough to spend money on education and scientific experiments. By 1550, Venetian glass-makers were making good mirrors, which they sold for a lot of money. Venetian glass-makers also made tons of pretty glass beads, which European traders sold to Native Americans and Africans in exchange for furs and people to enslave. 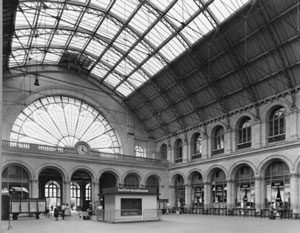 But, thanks to that same slave trade and colonization, Britain and France became richer in the 1600s. British and French glassmakers had the money to experiment, and they figured out better manufacturing methods like lead crystal and pouring molten glass instead of blowing it.

Galileo and telescopes
More about Jupiter
And about moons

They also made the first telescopes. Galileo used one of those telescopes to see the moons of Jupiter and show that the earth really did go around the sun. Still in the 1600s, rich people built glass greenhouses so they could grow oranges in Europe.

Aristarchus: earth goes around the sun
More about Galileo
History of astronomy
Oranges and lemons

By the 1700s most glass-making moved from Venice to Britain and France. About 1800, glassmakers began to use steam engines to do a lot of the work, so big sheets of flat glass became cheaper. People started to have glass in their windows at home. Architects even built railroad station roofs out of glass! Glass greenhouses made it possible to grow vegetables in the winter. 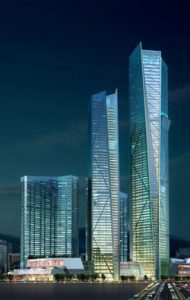 Soon everybody wanted glass for everything. French glassmakers began rolling glass on big iron tables in the 1830s. Then the British Henry Besemer figured out how to roll out a continuous ribbon of glass in the 1840s. British glassmaking got more and more mechanized.

By the 1960s, British glassmakers invented modern float glass, where instead of iron rollers the glass is poured onto a river of melted tin. With this glass, you could build whole skyscrapers out of glass and steel.

Most glass today is made in China

But since World War II Britain is poorer, and most glass isn’t made in Britain anymore. Today, China makes than half the world’s glass, used for everything from computer screens to car windows and solar panels. (And they also make a lot of the world’s steel.)

Did you need a second source to cite? Check out this article.

Did you find out what you wanted to know about medieval and modern glass? Let us know in the comments!

Learn by doing: scratch the backing off an old mirror to see what happens
More about Venice

How Glass Is Made, by Alan J. Paterson (1985). Easy reading, but it’s really about modern glass technology.