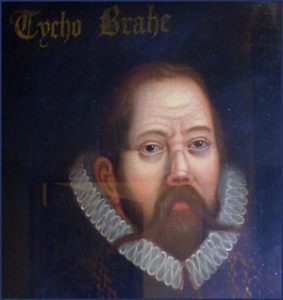 Early modern science: Tycho Brahe (He looks funny because his nose got cut off in a duel and he wore a false one made of brass.)

Europe’s colonialism and slave trading brought a lot of money to Europe. By 1600 AD the fashion for building new observatories that had swept from China west through Samarkand to Istanbul finally reached Prague. Prague was just west of the Ottoman Empire, in the Holy Roman Empire. The emperors paid for these observatories in order to get accurate horoscopes from astrologers.

In 1602, the astronomer Tycho Brahe was working a little south of Copernicus (and just outside the Ottoman Empire) in his new observatory at Prague. He unhelpfully reversed the progress made by Copernicus. Brahe returned to the idea that the sun went around the earth.

As Europeans got richer, more and more of them went to school, so there were more educated people to invent things. In the late 1500s AD, glass-workers invented the telescope. Soon afterwards, in 1610, in Padua, Italy, Galileo used one to look for parallax in the stars. But his telescope wasn’t strong enough for that. What Galileo did see was the moons of Jupiter, moving around Jupiter. If the moons of Jupiter went around Jupiter, then it began to seem more likely that Earth’s moon went around the Earth. In that case, the Earth and Jupiter were the same. They were both planets that went around the sun. Early modern science was able to show that Aristarchus had been right.

In 1628, William Harvey in England did many dissections – cutting dead people open. He was able to show exactly how the heart and the lungs worked together to circulate air through people’s bodies. This was not a new idea – ibn al Nafis had already laid it out in the 1200s. But Harvey described it much more completely.

In 1629, Giovanni Branca published a description of a steam engine. He may have been building on the work of Taqi al-Din in the 1550s.

In 1637, Rene Descartes published a more complete version of Oresme‘s medieval work showing the relationship between Greek geometry and Islamic algebra. Descartes showed that these were two different ways of representing the same natural world. Fermat took this a step further. He showed that the connection between geometry and algebra worked not just for two-dimensional equations but also for three dimensions.

In 1650, John Greaves translated two works of the Ottoman mathematician Ali Qushji into Latin. I don’t know if this served any purpose mathematically or was just for historical purposes.

More about European Science – The Enlightenment