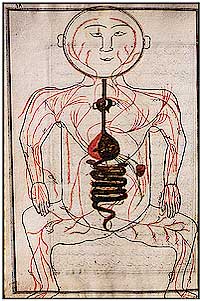 Who was ibn al Nafis?

Ibn al Nafis was born in Syria in the early 1200s AD, just as the power of the Seljuks was collapsing. He studied medicine in Damascus (in Syria) at first, but then moved to Cairo, in Mamluk Egypt, to work with the best doctors of his time (and maybe to escape the Mongol invasions of 1243).

How blood and air move around inside you

Ibn al-Nafis’ research followed in the footsteps of the earlier Egyptian doctors Praxagoras and Herophilus. Like them, he wanted to find out how blood and air circulated in the human body.

He’s a big deal because he figured out by cutting up animals (and maybe also people) that air gets into your blood from your lungs, goes from your lungs to your heart, then goes all around your body and back through the veins to the heart again, to be pushed back to the lungs.

What are lungs?
The circulatory system

Who was Ibn Sina?

Like ibn al-Haytham two hundred years earlier (also in Cairo), Ibn al-Nafis also worked on how human eyes worked. He figured out how the muscles behind the eye work with the optic nerve, and some new treatments for glaucoma.

Who was ibn al-Haytham?
The camera obscura

Like Maimonides (also in Cairo), Ibn al-Nafis was also very concerned that doctors should behave well and really care about their patients. He insisted that surgeons should follow three stages: first, they should explain to the patient what the surgery would do and how the doctor knew it would work. Second, they should do the surgery itself. Third, they should check up on the patient after the surgery and make sure he or she is doing okay.

When did ibn al-Nafis die?

Ibn al-Nafis died in 1288 AD, in Cairo. He was one of the last great doctors of ancient Egypt. Only a short time after Ibn al-Nafis’ death, the bubonic plague swept through Egypt and the Mamluks collapsed, leaving Egypt too poor to pay for universities and medical research.

Learn by doing: go somewhere dark where you can see the Milky Way
More about Islamic medicine