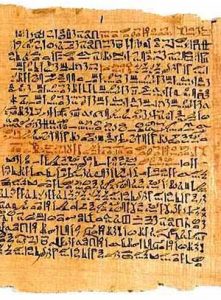 Ebers Papyrus, one of the oldest known medical texts about the human body. From Egypt, about 1550 BC

How does the human body work?

Doctors have been trying to figure out how the human body works since the Stone Age, and there are still many things we don’t know about the human body even today.

Medical researchers all over the world have contributed bits of knowledge, and learned from one another. Some things they figured out were right; other times their ideas turned out to be wrong.

In Ancient Egypt, about 2000 BC, doctors knew that people had a stomach, a small intestine, a large intestine, an appendix, a liver, a spleen, two kidneys, and a bladder. They knew women had a uterus, and that babies grew there.

Egyptian doctors thought that air came in through your mouth and went to your lungs and your heart, and from there the air went through your arteries all over your body. That’s right as far as it goes. But they – like Chinese, Indian, American and Australian doctors at the same time – thought that a lot of illnesses were caused by demons.

Then beginning about 300 BC, doctors all across Europe and Asia changed their minds about demons making you sick. Instead, doctors began to think that the body was made out of three or four different substances. The Greeks called these substances “humors”. There were four Greek humors: blood, black bile, yellow bile, and phlegm (snot).

The four humors needed to be kept in balance with each other. If they got out of balance you would get sick. A fever, for example, meant you had too much blood. Indian doctors called the substances bile, wind (air), and phlegm (snot). In China, doctors thought that people were made of yin and yang, or later of five elements: wood, fire, earth, metal, and water.

These ideas about substances and balance were wrong. But they encouraged doctors to find out more about the parts of the body. In Han Dynasty China, the doctors who wrote the Nei Jing knew that the heart pushed blood through the body.

Indian doctors about this time found out that food moved from your stomach through your intestines to your butt. They knew what kidney stones were and how to get them out using surgery. And they knew that pus was a sign of infection in the wound, and should be washed away. They understood what a cataract was on your eyes and did operations to fix cataracts.

Greek doctors observed the effect of head injuries. They concluded that people used their brains for thinking. They knew that the spinal cord carried messages from the brain to nerves in your arms and legs.

The Greek doctor Erasistratos knew about the valves in the heart, though not what they were for. Herophilus in Egypt figured out that arteries were different from veins. But both the Greeks and the Chinese still thought your arteries carried air all over your body. Aristotle believed that only men produced seeds to make babies. He thought women just had the uterus that housed the man’s seed.

Galen thought blood only moved in one direction. He didn’t realize the blood came back to your heart again. And he thought of the stomach as being like a small animal, with its own feelings that caused hunger. Galen did realize that women’s and men’s reproductive systems were different versions of the same thing, and that both men and women contributed to making a baby.

Learn by doing: feel your own pulse
More about the human body

Bibliography and further reading about the history of the human body: