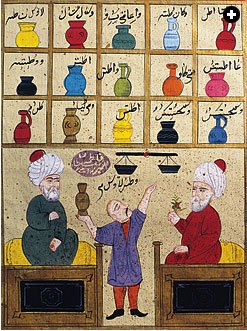 Islamic medicine: From an Ottoman manuscript, two doctors telling the pharmacist how to make different medicines

Doctors made big scientific advances in medicine during the Islamic empire. The Islamic Empire was rich enough from Silk Road trade and trading on the Indian Ocean to pay a lot of doctors and scientists, and to open a lot of schools. Islamic doctors began by collecting all the medical observations and logic of the past.

Who was Galen?
Sushruta and Charaka
Egyptian medicine
History of medicine
All our Islamic Empire articles

With this background, Islamic doctors went on to much more practical observations. They found some useful cures for some diseases. Medieval Islamic doctors were especially good at treating eye infections and eye problems like cataracts.  In the 900s AD, Ibn al-Haytham cut eyes apart to figure out how they worked.

How did eyes evolve?
Ibn al-Haytham and eyes

Another big achievement of Islamic doctors was that they started the world’s first hospitals. In hospitals, you could keep sick people apart from healthy people. The hospitals quarantined people for a few weeks. (Our word quarantine comes from the Latin for “forty days”.) Quarantine in hospitals helped to keep diseases like smallpox and measles from spreading.

History of smallpox
What is measles?

One famous doctor was al Tabari, an Iranian in the early 800s AD. Al Tabari wrote a huge medical encyclopedia, listing all the different diseases and their treatments. One of al Tabari’s students was al Razi (or Rhazes), who was also from Iran.

Al Razi was born about 850 AD. He wrote a book about measles and smallpox. This is our first description of measles. Al Razi explains how measles is different from smallpox. However, Al Razi doesn’t seem to know about inoculation, even though doctors in India were already inoculating people. 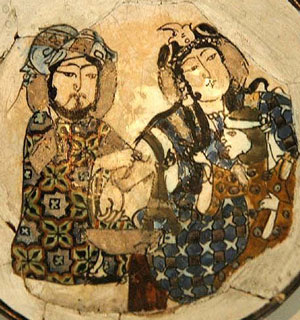 What is a fever?

Al Razi also explained that a fever was not part of the illness. It was the body’s way of fighting the illness. (But many medieval Islamic doctors still thought that fevers were caused by having too much blood. They kept right on bleeding people to cure the fever.)

How do you catch diseases? Ibn Sina

Another famous doctor was Ibn Sina, known in Europe as Avicenna. Ibn Sina was born in Bukhara (modern Uzbekistan), about 980 AD.

More about ibn Sina
What is tuberculosis?

He may have been the first doctor in the world to see that tuberculosis and smallpox were catching. Ibn Sina still didn’t really know about germs, though. That’s because germs are too small to see without a microscope.

How to stay healthy with exercise and eating right – Maimonides

Maimonides, who was Jewish and not a Muslim, was the sultan Saladin‘s doctor in the 1100s AD. Maimonides’ book about medicine became very famous.

More about Maimonides
Where do lemons come from?

His book emphasized prevention – living a healthy life so you wouldn’t get sick. Maimonides recommended that people eat lemons, which were new then. His recommendation made lemons more popular all around the Mediterranean Sea.

How does your blood get oxygen to your body? Ibn al-Nafis and Ibn al-Quff

Ibn al-Nafis was another famous doctor from the Islamic Empire. He was born in Damascus, Syria, but he worked mainly in Egypt in the 1200s AD. Ibn al-Nafis was the first scientist to describe how blood goes from your heart to your lungs to get air.

Ibn al-Nafis and his discoveries

Then your heart pushes the air all through your body. (The Roman doctor Galen had suggested some ideas about this, but Ibn al-Nafis showed that Galen’s ideas were wrong). Another Islamic doctor about the same time, Ibn al-Quff, worked in Damascus (Syria). al-Quff figured out how the blood gets from the arteries to the veins through tiny capillaries.

Did you find out what you wanted to know about medieval Islamic medicine? Let us know in the comments!

Learn by doing: visit somebody in a hospital
More about Maimonides