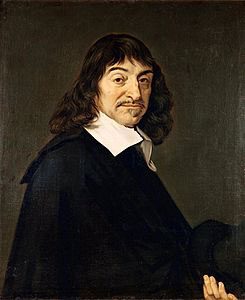 René Descartes was one of the earliest philosophers of the European Enlightenment, in the early 1600s AD. He was just 8 years younger than Hobbes. While Descartes was growing up, Henry IV was killed, Marie de Medici ruled, and then Richelieu.

More about Hobbes
The Enlightenment
All our European History articles

René and his sister Jeanne

Descartes’ mother died in childbirth when he was a baby. As a Catholic, Descartes went to Jesuit school. (His sister Jeanne didn’t get to go to school; she inherited some money, married a local rich man and had a son who became a lawyer.) When Galileo discovered the moons of Jupiter, Descartes heard about it from his Jesuit teachers.

Who were the Jesuits?
Galileo and the moons

After college, Descartes bummed around Europe for almost ten years, fighting in various wars and talking to scientists and mathematicians wherever he went. Like Hobbes, Descartes never married, and the one daughter he had died young of scarlet fever. After ten years, he started writing philosophy books.

What was Descartes’s philosophy?

Like Machiavelli and Hobbes, Descartes thought that science could explain everything by logic and reason. But where Machiavelli and Hobbes were most interested in politics, Descartes used logic to explain individual people’s thoughts and morals. He started from the most basic point he could think of, which he summed up in Latin, “Cogito, ergo sum.” In English, that’s “I think, therefore I am.” We know we exist, because we can think.

Descartes argued that there must be a world outside ourselves, because we hear things and see things that we didn’t think of ourselves. But he warned us to use reason to check whether the things we see are real. He gave the example of a ball of wax: we feel the wax and it is solid and cold. But when we heat the wax, it melts into a puddle. Our reason tells us it is the same wax, even though our senses tell us it is something completely different.

To find out how the world works, we have to do experiments, and then use reason to judge the results. Descartes demonstrated the importance of reason and logic in his work improving Oresme‘s theory of the relationship between Greek geometry and Islamic algebra.

Who was Oresme?
Who invented algebra?
Greek geometry and proofs

Descartes also tried to figure out how people could use reason to decide what was good and what was bad. He agreed with the ancient Greek philosophers Zeno and Epicurus that being good was the best way to be happy, and he thought that if you used reason, rather than emotion, to decide what to do, you would be more likely to make good choices. Unlike Hobbes, though, Descartes was a firm believer in God and in the existence of the soul.

Who was Zeno?
And Epicurus?

Descartes died of pneumonia in 1650 while he was visiting the ruler of Sweden, Queen Christina. He was 54 years old. He’s buried in St. Germain des Pres, in Paris.

Hobbes
Go on to Locke
France in the 1600s

Bibliography and further reading about Descartes: