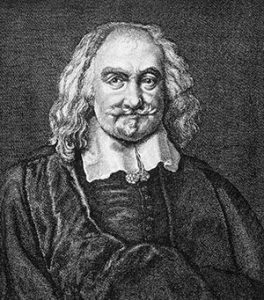 When did Hobbes live?

Thomas Hobbes (yes, he’s the one that Calvin named his tiger after) lived in England, about fifty years after Calvin and about the same time as Descartes. He was born in 1588.

Who was John Calvin?
Who was René Descartes?
All our modern Europe articles

While Hobbes’ sister was kept at home, as a man Hobbes got to go to college at Oxford and read Thucydides, Aristotle, and other ancient authors. After college, Hobbes began teaching rich young men as a private tutor. (He never got married or had children.)

Who was Aristotle?
Galileo’s astronomy
Harvey, air, and blood
What’s the Enlightenment?

In 1610, when Hobbes was 22,91 he traveled with his students to France and Italy, and ran into the very beginning of the Enlightenment there. He had heard about the work of astronomers like Galileo, and medical researchers like William Harvey. Hobbes wasn’t that interested in stars or sickness, but he wanted to see what this kind of scientific thought could do for politics and social science.

The “state of nature”

Hobbes saw that stars and planets formed solar systems and galaxies. And the heart and brain worked with the lungs to form the human body. He suggested that people also needed to organize themselves into systems, which we call society or government. Men and women without any organization, in a “state of nature”, would selfishly take care of themselves, and not care about anybody else. They would fight with other people all the time. Their lives would be “solitary, poor, nasty, brutish, and short.” Hobbes’ ideas served to justify Europeans who were enslaving people in Africa and the Americas.  And their enslavement – their work – supported the education and careers of men like Hobbes.

The “social contract” and Leviathan

In order to have happy, peaceful lives, people needed to enter into a “social contract”. That would be a cooperative arrangement, rather like the Roman “do ut des“. Just as the arms and legs worked together to make a human body, people could work together to make a country. Hobbes called this giant super-creature a Leviathan (luh-VI-uh-than), after a huge monster in the Christian Bible.

Roman religious ideas
Who was Plato?

But like Plato, Hobbes thought people were too competitive to rule democratically. So Hobbes was against democracy. Just as the brain runs the human body, a king or prime minister should run the Leviathan. A strong leader, Hobbes says, settles arguments and brings peace.

Like Machiavelli, Hobbes didn’t see any reason to think that God chose kings. And he didn’t think that people should obey their kings because they were special to God somehow.

Who was Machiavelli?
European women’s history

People should obey kings because their lives will be better for it, even if they’ll have to give up their freedom. Hobbes says this is like how men rule their own families. Women, children, servants, and farmhands have to obey men. (But Hobbes doesn’t explain how we get from the state of nature, where men and women are equal, to the family where men rule.)

Where men are natural rulers?

This is the other Hobbes (and Calvin)

The result of this family metaphor, though, is that it appears that men, rather than women, should be the rulers of countries. Hobbes was born when Sofia Baffo ruled the Ottoman Empire, Catherine de’ Medici ruled France, and Queen Elizabeth ruled England.

And later he lived in France when Anne of Austria ruled it. So Hobbes knew that women did rule countries, but he didn’t work that into his system. Instead, Hobbes used the “voluntary” submission of women to their husbands as a metaphor for the way men should consent to be ruled by their king.

Hobbes, Cromwell, and the Puritans

In 1637, Hobbes came back to England. Cromwell was just beginning his revolution against King Charles. Hobbes took the side of Cromwell and the Puritans. But he ended up making enemies on both sides of the war. All the fighting convinced Hobbes even more of the need for strong leaders and peace.

Who was Cromwell?
And the Puritans?

Because of his enemies, Hobbes had to spend another ten years in exile in Paris. While he was there, he met the French philosopher Descartes. They argued about souls. Descartes thought people’s souls were separate from their bodies. Hobbes thought that there was no difference between souls and bodies.

Hobbes asked how the soul communicates with the body if they’re separate? Descartes complained that if souls were just part of the body, religious faith was impossible. Many other people agreed. They saw Hobbes as an atheist. Even after Hobbes returned to England he kept on getting in trouble with the Church and political enemies. But he lived to be very old. He died of a stroke in 1679, when he was 91 years old.

Go on to Descartes

Bibliography and further reading about Hobbes: