Who is Plato? Allegory of the Cave 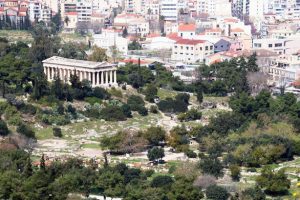 Who is Plato? Socrates probably taught Plato in this part of Athens, near the Athenian Agora (but the temple wasn’t there yet)

The Greek philosopher Plato was born about 429 BC, close to the time when Pericles died. He died in 347 BC, just after the birth of Alexander the Great.

(More about Athens in the time of Plato)

Plato was born in Athens, to a very rich and powerful family. He got the best possible education. Many of his relatives were involved with Athenian politics, though Plato himself was not. Athens was in the middle of fighting the Peloponnesian War, and when Plato grew up, he fought for several years as a soldier in that war.

Who is Plato? Plato was Socrates’ student

When Plato was a young man, during and after the Peloponnesian war, he went to listen to Socrates. Plato learned a lot from Socrates about how to think, and what sort of questions to think about.

When the people of Athens killed Socrates in 399 BC, Plato was very upset (He was 30 years old when Socrates died). Plato began to write down some of the conversations he had heard Socrates have. Practically everything we know about Socrates comes from what Plato wrote down.

After a while, though, Plato began to write down his own ideas about philosophy instead of just writing down Socrates‘ ideas. One of Plato’s earlier works is the Republic. The Republic describes what Plato thought would be a better form of government than the government of Athens.

Plato thought that most people were pretty stupid, and so they should not be voting about what to do. Instead, the best people should be chosen to be the Guardians of the rest. (Remember Plato was from a very rich family so he probably thought he was one of the best people!). 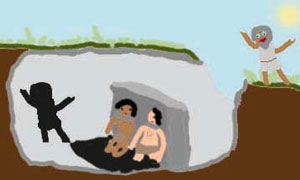 Plato’s Cave: the Allegory of the Cave

Plato also thought a lot about the natural world and how it works. He thought that everything had a sort of ideal form, like the idea of a chair. Then an actual chair was a sort of poor imitation of the ideal chair that exists only in your mind.

Plato’s Allegory of the Cave

One of the ways Plato tried to explain his ideas was with the famous metaphor of the cave. He said, Suppose there is a cave, and inside the cave there are some men chained up to a wall, so that they can only see the back wall of the cave and nothing else. These men can’t see anything outside of the cave, or even see each other clearly, but they can see shadows of what is going on outside the cave. Wouldn’t these prisoners come to think that the shadows were real, and that was what things really looked like?

A video about Plato’s Cave

Suppose now that one of the men escaped, and got out of the cave, and saw what real people looked like, and real trees and grass. If he went back to the cave and told the other men what he had seen, would they believe him, or would they think he was crazy?

It’s possible that Plato’s ideas about the difference between reality and the illusion we perceive are related to Hindu and Buddhist ideas about nirvana, which were forming in India about the same time. You could also compare the parable of the cave to the Indian story of the Blind Men and the Elephant, which was written around the same time.

Learn by doing: compare Plato’s ideas with Buddhism
Tell me more about Plato