What is the Socratic method? Greek philosophy 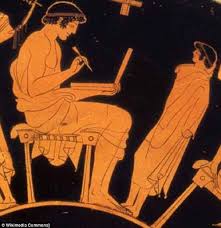 A young teacher and a student talking about the lesson (Athens, 400s BC)

Here are some of the conversations, or dialogues, that Plato wrote down. They are summaries of what Plato remembered of his teacher, Socrates‘ teaching and conversations. Most of them are named after the person that Socrates was talking to on that particular day. In each dialogue, Socrates uses the same method: he asks questions to encourage his students to reach logical conclusions. Your teachers probably do the same thing today.

The Euthyphro (YOU-thi-fro) is a conversation about what piety is – what does it mean to respect the gods? Is it just a sort of bargain, where people do things to make the gods happy and then the gods do things for us? Euthyphro thinks he knows what piety is, but Socrates, by asking Euthyphro a lot of questions, shows Euthyphro that he doesn’t really have any reasons for what he thinks.

A video summing up Euthyphro’s conversation with Socrates

The Apology is the defense speech that Socrates made to the Athenian jury when he was on trial for his life (“apologia” is just the Greek word for a defense speech). Socrates was tried for impiety, and for corrupting the youth. He said he hadn’t done anything wrong. He had just showed people that they didn’t have any reasons for believing what they did. But he was sentenced to death anyway.

The Crito (CRY-toe) is a conversation Socrates had with his friend Crito after the trial, while he was waiting to drink the poison that would kill him. Crito tried to convince Socrates to escape from jail and run away to another city. Crito had bribed the guards so this was possible. But Socrates said no. He said it was wrong to run away. He was a good Athenian citizen, and he obeyed the law, and if the law said he should die, then he would stay and die. If the law was wrong, maybe his death would show people how wrong it was.

Learn by doing: what do you think? write about what it means to respect the gods, or God.
More about Socrates

Bibliography and further reading about Socrates:

Socrates: Ironist and Moral Philosopher, by Gregory Vlastos (1991). By a specialist, for other philosophers.