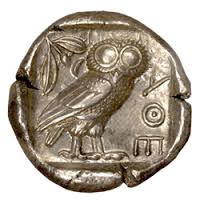 Beginning around 600 BC, each Greek city-state minted (made) its own kinds of coins. (They got the idea from the Lydians in West Asia). A lot of the Greek coins were silver.

What is a city-state?
History of money
Archaic Greece
All our Ancient Greece articles

You made them by taking a small lump of silver and putting it on an iron mold, and then striking it with a hammer that had another kind of mold in it. That way you could squash a picture into both sides at the same time. Mostly, probably enslaved people worked making these coins.

History of silver
Slavery in ancient Greece
Athens under the Tyrants

The Athenians had a lot of silver from their silver mines at Laurion, so a lot of their coins were silver.

The pictures on the coins were different for each city-state. Athenians put a picture of Athena’s owl on their silver coins. Can you see that the coin says ATHE on it in Greek letters?

Who is Athena?
What is Pegasus?
Where is Corinth?

Silver obol (front and back) from Kelenderis in Cilicia (300s BC)

Silver coins from Corinth had a picture of the flying horse Pegasus. Can you see him?

Just like today, some coins were worth more than others. This coin is worth less. It’s an obol (it has a centaur on it). An unskilled worker, like someone who unloaded boats or dug ditches, in Athens, would earn about two obols a day.

So two silver obols a day was approximately minimum wage in ancient Athens.

Even an obol was too much to spend at the store, so the Athenians also made tiny silver coins and larger bronze coins. Eight chalkoi were worth one obol.

All the designs on these coins changed a little from year to year, so numismatists can tell what year (more or less) a particular coin was made, or struck. The government changed the coins so that if anyone cheated and put less silver in some coins, it would be easy to know which were the bad coins.

After the Romans conquered the Greeks, Greek cities stopped minting their own coins and used Roman coins instead.

Learn by doing: making Athenian coins
Check out the coins of other Greek cities.