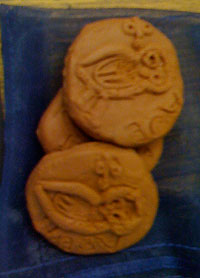 How minters made Greek coins

Each Greek city made its own silver coins. The cities they made their coins to look different from each other. That way you could know right away which city the coins were from, and whether to trust that the coin had as much silver in it as that city said it did.

Greek minters made coins by putting a blank coin on a metal stand that had an image carved into it. Then you set a metal punch (like a stick as big around as one coin) on top. This had a different image carved into it. Then you hit the metal punch with a hammer. That would drive it into the coin and transfer both images. One image would be on the front of the coin and the other on the back of the coin.

This was the same way that Persians, Etruscans, Carthaginians, and Egyptians made their coins. Some of these other places made coins before the Greeks, and probably the Greeks learned how from the Lydians.

Athenian coin with Athena’s owl on it.

You can make your own Greek coins out of clay. These Athenian coins have the owl of Athena on them, and they say “ATHE” in Greek letters. These were made by laying thin strips of clay on top of the coin, but you could also try carving a punch out of wood and using that to make the image.

Who was Athena?
The Greek alphabet
Classical Athens