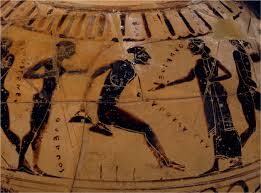 Olympic long jumping with weights to make him go further

Competition, for the Greeks, was a way of pleasing the gods. Competition pleased the gods by creating order out of chaos. That is, it took things which had been all jumbled up, and put them in a defined order, from best to worst.

In the Greek Olympics, like the Olympics today, only boys could race in the boys’ races. There were separate games for girls. Do you want to have your races separately, or together? Why?

The prizes for the Olympics were laurel wreaths (if you don’t have laurel growing where you are, any leafy branch will do) and jars of olive oil.

One thing that can happen when you create order by lining everybody up from best to worst is that some people will feel bad. Is that okay? Would you rather have chaos, where nobody knows who the best runner is? Or give everyone a prize, so that there is no order? If the idea is to know who the best and worst runners are, should the boys and girls run together?

More about the Greek Olympic Games

Bibliography and further reading about the Olympic Games:

More about the Greek Olympic Games
A day in Ancient Greece