How did Greek plays get started?

One great activity to understand ancient Greece better is to stage a scene from a Greek play The first Greek plays grew out of choir performances, starting around 600 BC. First, the choirmaster began facing the choir and singing a few lines, and then the choir would respond. In this way, you could tell a short story.

Then the choirmaster was joined by the assistant choir-master, and the two of them spoke to each other, as well as to the choir. With these two actors you could tell a story with a more complicated plot.

By about 525 BC, somebody had the idea that each of the actors could play several different roles by going offstage and changing costumes. Most Greek plays have only two speaking actors onstage at any one time, plus the choir and a few extras who don’t speak. When there are more speaking parts, they’re all played by the same two actors, who go offstage and change costumes. A few later plays (after about 475 BC) have three speaking actors; no Greek play has more than that. 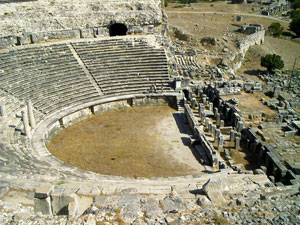 A project for students

So what might be interesting would be to pick a few scenes from a Greek play to act, but try to use only two speaking actors, plus the choir and non-speaking extras. Let the kids figure out how that would be managed – who has to play which parts? How do they change their costume so they can play somebody else?

Why did the Greeks live with such restrictions on their plays? And why didn’t they experiment more? Because the plays were presented as part of a competition, and so they had to obey the rules of the competition, or be disqualified.

Perhaps you, too could have a competition between different plays, and have judges or a vote decide which one was best?

Which plays should we try?

One good one to try might be Euripides’ The Trojan Women, about the fall of Troy after the Trojan War. Then the kids could learn about the Trojan War at the same time. Another good choice is Aeschylus’ Agamemnon – the first play to have three speaking actors.

The Trojan Women
Who was Euripides?
Agamemnon 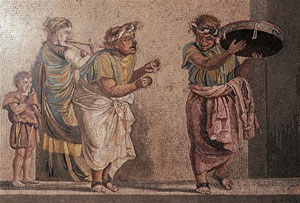