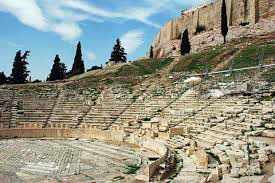 The earliest Greek theaters, probably as early as the Stone Age, were just grassy hillsides with a flat place at the bottom, so people could sit on the hillside and watch someone making a speech at the bottom, or watch a group of people singing a song or dancing. Because they were sitting on a hillside, more people could see what was going on than if they were sitting in a flat field. Ideally, you would be looking towards a nice view on the other side of the flat stage, so it would be more interesting to look at.

But it wasn’t terribly comfortable sitting on the grass. People must have often brought blankets or straw mats to sit on. After a while, maybe in the Archaic period about 600 BC, the rich men or women hosting an event began to put wooden benches on the hillside for people to sit on. Also, that way you could mark off a certain number of seats, and they may have begun to sell tickets. 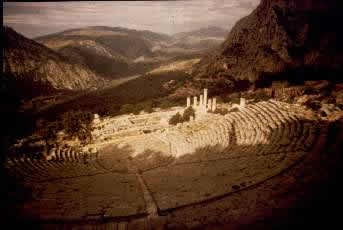 In the Classical period, about 450 BC, many Greek cities were richer than they had been before, and one thing they decided to do with their money was to fix up their theaters. The Greeks had just invented the idea of a theatrical play, and men like Aeschylus and Sophocles were writing plays, so theaters weren’t just for singing and dancing anymore. People wanted to have buildings that were nice enough to go with the great plays. In many cities, the government replaced the old wooden benches with limestone or even marble benches, and built a circular stage at the bottom out of limestone or marble too. Sometimes they put a low stone platform at the back of the stage, to use for scenery.

By 200 BC there were stone theaters wherever there were Greek cities, from Spain to Sicily to Syria and Afghanistan and Pakistan. But all Greek theaters, wherever they were, were still built into natural hillsides, just as they had been in the Stone Age. It wasn’t until the Romans began to build stone theaters, a few hundred years later in 54 AD, that they began to build artificial hillsides for their theaters and amphitheaters.

The Archaeology of Greece: An Introduction, by William R. Biers (1996) Biers writes very clearly and has a lot of good pictures.

Or check out this article onGreek theaterfrom the Encyclopedia Britannica.