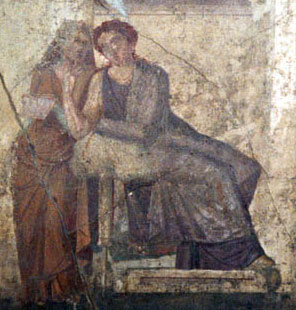 Euripides’ plays: Phaedra and her slave (a fresco from Pompeii, ca. 79 AD)

When did Euripides live?

Euripides was the youngest of the three great tragic playwrights of classical Athens. He lived in the last part of the 400s BC, during the Peloponnesian War.

Many of Euripides’ plays, like Medea and Phaedra, have important female characters, and he is sometimes thought of as very sympathetic to women and thinking that women should be treated more fairly.

But this is probably not true, or only partly true. Euripides used women to represent the irrational, or craziness, not thinking, following your nature instead of your mind. The action in the plays is between this irrational female character, and a rational man.

What did Euripides show us?

But it is not always the rational man who wins in Euripides’ plays. Euripides insists that we all must acknowledge both sides of ourselves, the animal and the godly, and not pretend that we can always rule our bodies with our minds, like Star Trek’s Vulcans.

In the Bacchae, for instance, Pentheus tries to be rational, but ends up being torn into pieces because he will not let himself go dance.

In his play Trojan Women, on the other hand, Euripides shows another side of life – the women of Troy grieve for their dead husbands and fathers but make sense, and the Greek men, who should be rational, are the ones who get crazy and violent.

Learn by doing: do women still play the irrational character on TV? Find examples.
More about Euripides: the Bacchae